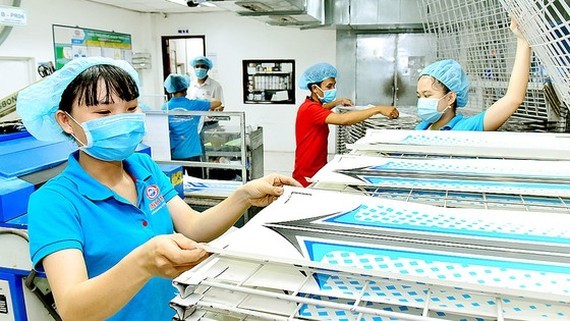 Illustrative image. (Photo: SGGP)
It was one of the two GDP scenarios for 2022 announced by the Ministry of Planning and Investment (MPI) at a routine government press briefing on October 1.

In the worst-case scenario, the GDP will grow at 7.5 percent, provided that many challenges and uncertainties are expected in the fourth quarter of this year, Phuong told reporters.

Commenting on Vietnam’s economic outlook for 2023, he said there will be both challenges and opportunities, but the former are likely to outweigh the latter and be even tougher in the wake of inflationary pressure worldwide and gloomy global economic outlook.

He noted that global inflation, particularly in major economies as well as Vietnam's key partners, is unlikely to ease over the next one or two months but certainly will linger on in 2023.

The official also voiced concern over other threats to the Vietnamese economy, emphasizing the ongoing Russia-Ukraine crisis and non-conventional risks like storms, flooding, and epidemics.

The MPI forecast the Vietnamese economy will expand around 6.5 percent in 2023 in a growth scenario submitted to the Government, he said.

The deputy minister also revealed that 46.7 percent of the total public investment has been disbursed so far this year.