With a population of one hundred million people, of which 60% are youth who are willing to try out new products, the Vietnamese market looks highly attractive to foreign retailers. There are currently about 44 million Vietnamese in the middle class, and according to some forecasts this number will increase to 95 million by 2030. In the food and beverages sector alone, the annual growth rate is about 10% per year, outperforming the general growth rate of many other industries. This is also the reason why many big names in fast food and beverages ambitiously entered the Vietnamese retail market. 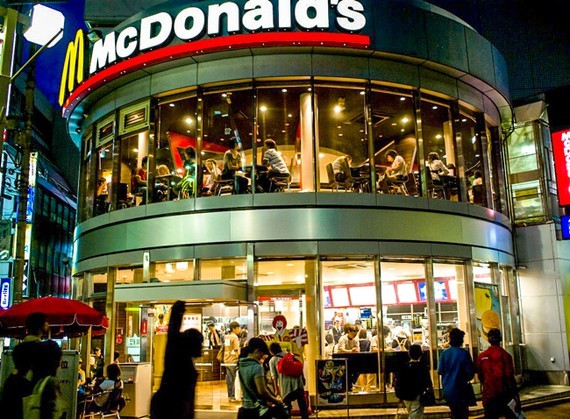 The McDonalds chain store has not been as successful in Vietnam as expected.

Starting in the late 90s, three fast food chains, namely, Jollibee from the Philippines, KFC from the US, and Lotteria from South Korea, invested in opening fast food stores in Ho Chi Minh City in Vietnam. Jollibee opened its first store in 1996, KFC in 1997, and Lotteria in 1998. Since then, Vietnamese people have become well acquainted with fried chicken, hamburgers, and carbonated drinks. More than ten years later by 2012, the famous American fast food brand, Burger King, made its presence in Vietnam in prime locations across several provinces. However, the most impressive opening of the fast food industry in Vietnam was the entry of McDonald in 2014 in Ho Chi Minh City.

Along with the fast food and the beverage sector, many international coffee brands have also well penetrated the Vietnamese market, such as NYDC from Singapore, which appeared in 2009, and Gloria Jean's Coffee from Australia which opened its first store in 2006 under the name Coffee Bean & Tea Leaf company. Among the major coffee brands, Starbucks has continued to attract a lot of Vietnamese consumers since its first store opening in District 1 in Ho Chi Minh City in February 2013. Now, the Vietnamese market seems to have a pretty big presence of world famous fast food and beverage companies.

The common factor of all these brands when coming to Vietnam, is that they quickly dominated the market by opening dozens of stores across many provinces and cities. Seeing the financial potential and global reach of these food chains, one would think that their goals are well defined. However, reality seems to be just the opposite. Other than a few profitable brands, many names have already quietly withdrawn from the market, while many others have had to slow their speed in expanding their chain of stores.

According to The Korea Times of South Korea, the Lotteria fast food chain in Vietnam did not generate any profit for Lotteria GRS last year, and hence it is now withdrawing from the Vietnamese market. However, a representative of Lotteria Vietnam denied this information and said that they want to continue to expand in the Vietnamese market. Nonetheless, with this news, it is necessary to look back at how this South Korean fast food giant fared in recent years. After a strong presence for 23 years, Lotteria currently has around 200 stores, but in recent years it has continuously reported losses. In 2016, Lotteria reported a loss of VND 135 bn, in 2017 it showed a loss of VND 20 bn, and in 2018, although maintaining a revenue of about VND 1,000 bn, the company showed losses of upto VND 400 bn.

Big companies like Burger King or McDonald also did not achieve their original target of opening their scheduled number of stores. In particular, Burger King poured USD 40 mn into Vietnam in 2012 and set a target to open 60 stores by 2016, but up until now it has opened only nine stores. Similarly, after a highly anticipated and resounding opening, McDonald was unable to meet its target of 100 stores by 2022, and has only achieved a mere opening of 23 stores, with the number of customers also declining by the day.

Speaking with Saigon Investment, Mr. Ly Truong Chien, an economist, said that any cuisine must always be local, which is a challenge for foreign companies. Fried chicken or hamburgers can be eaten once or twice a week, but cannot substitute for a traditional meal favored by Vietnamese people. Vietnamese are perpetually  concerned about their health, and are aware that fast food is unhealthy and leads to obesity. However, the key factor that has kept these fast food chains from withdrawing is the long lease term costs of space. There was a time when Burger King was willing to spend a fortune to occupy beautiful prime premises, but then they could not maintain this strategy for long.

While many fast food brands have reconciled to prolonged losses by going slower than their original plan, many foreign coffee brands have already quickly withdrawn from the Vietnamese market. First to go was the Gloria Jean's Coffee company after almost ten years in Vietnam, after the chain had to narrow its business and then finally withdrew from the market in April 2017. NYDC also withdrew from the market after opening six stores. On the other hand, Starbucks is still being considered a success even though the brand has only 60 stores in major cities up until now.

When entering Vietnam, foreign brands often target the mid-end or high-end segment of consumers, so they have to open stores in prime locations.  Over the years, consumers in these segments have dwindled, which perhaps could also be reason why so many foreign fast food and coffee chains are looking at withdrawing from the Vietnamese market altogether.