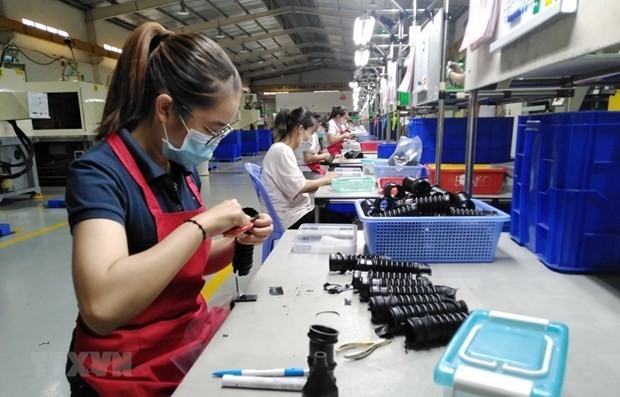 Workers put the finishing touches on rubber components at a factory in Dong Nai province (Photo: VNA)
The Swiss-funded Nestle Vietnam, based at the Bien Hoa 2 Industrial Park, has continually increased its charter capital since opening its first factory on-site in 1995.

Most recently, in April, it added US$132 million to its investment in a coffee production project at the Amata Industrial Park in Dong Nai, bringing the total to over $400 million.

Carl Khoury, a manager at the company, said it has set up four factories in Vietnam, including three in Dong Nai, and it considers the province a key destination since it boasts industrial parks with complete infrastructure, borders Ho Chi Minh City, the country’s southern economic hub, and is served by highways and expressways favorable for goods transportation.

He noted that the company has developed continually over the last 25 years thanks in part to a sound investment climate and clear legal procedures that match international practice, both nationally and in Dong Nai.

In late March, the Soheung Vietnam Co. Ltd, with investment from the Republic of Korea, raised its capital by $30 million to $80 million to expand its factory at the Long Thanh Industrial Park in Dong Nai.

The company said the greatest challenge foreign businesses encounter when investing in a country is a lack of understanding about local practices and legal regulations.

However, it added, local agencies have helped it handle environmental and construction-related procedures, while taxation, business registration, and insurance services have been provided online, facilitating operations.

Dong Nai has attracted 66 FDI projects worth over $680 million since the beginning of this year, while its target for the year as a whole was around $700 million, according to the province’s Industrial Zones Authority.

It is currently home to nearly 1,400 FDI projects from 41 countries and territories with combined capital of $27 billion.

The province pledges to provide the best possible conditions to investors, he noted, adding that it prioritizes large-scale projects using advanced technology and skilled workers in supporting industries.

In the time ahead, it will also boost infrastructure development, build modern residential areas, and invest strongly in education and healthcare, as investors come to the province not only to seek profit but also to enjoy a good life, Dung said.