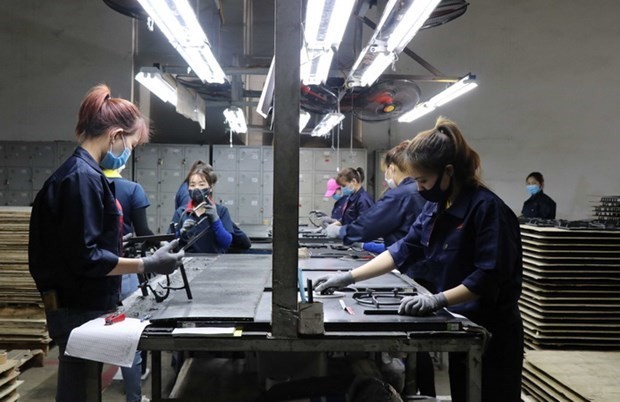 Workers at Bright Vietnam International Co., Ltd., Thuan Thanh district, Bac Ninh province (Photo: VNA)
Notably, the total additional registered capital stood at over US$8 billion, an annual rise of 26.7 percent.
During the period, US$14.1 billion was poured into 1,577 newly-licensed projects, up 3.76 percent in value but down 31.8 percent in volume over the same period last year.
The remaining investment capital was used for capital contribution and share purchases in a total 3,466 transactions.
Foreign investors landed investments in 18 sectors, with processing and manufacturing absorbing the largest amount of capital (over US$14 billion or 53 percent), followed by power generation and distribution (over US$5.7 billion), real estate (US$2.41 billion), and wholesale and retail sale (US$1.27 billion).
Among 100 countries and territories having investment in Vietnam in the period, Singapore took lead with US$7.6 billion, making up 28.7 percent of the total. The Republic of Korea (RoK) came second with more than US$4.36 billion, and Japan was the third largest investor with US$3.7 billion.
Localities that attracted the most FDI were Long An (US$3.76 billion), HCMC (nearly US$3.43 billion), and Hai Phong city (over US$2.8 billion).
Export turnover of the FDI sector (including crude oil) was estimated at nearly US$220.2 billion, up 19.7 percent over the same period and accounting for 73.6 percent of Vietnam’s total. The sector’s import value (excluding crude oil), meanwhile, exceeded US$195.5 billion, an annual increase of 29.5 percent and accounting for 65.5 percent of the country’s total.