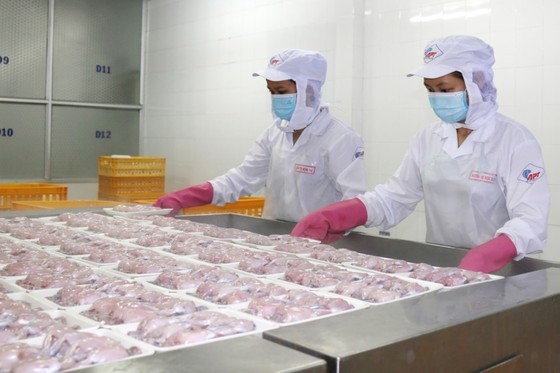 Food enterprises accelerate investment to meet increasing demand in countries
Ms. To Thi Tuong Lan, Deputy General Secretary of the Vietnam Association of Seafood Exporters and Producers (VASEP), said that the industry's export turnover has seen explosive growth over the past four years.

Specifically, it is estimated that by the end of November 2022, seafood export turnover achieved US$10 billion which comes earlier than expected. Vietnamese food has been sold in markets of member countries of the Comprehensive and Progressive Agreement for Trans-Pacific Partnership (CPTPP) generating revenue of about $2.6 billion, an increase of 40 percent compared to 2021 and an increase of 13.6 percent compared to 2018.
Exports to each country in the bloc also grew by double digits compared to 2021, such as Japan up 33 percent, Canada up 67 percent, Australia up 53 percent, Malaysia up 34 percent, and Mexico increased by 59 percent.
Especially, Vietnamese foodstuff was sold in the Peruvian market with a value of nearly $12 million, an increase of 100 percent. Japan is Vietnam's traditional market with a value of $1.3 billion-$1.4 billion, greatly contributing to the seafood trade between Vietnam and the CPTPP.
In general, Vietnamese businesses have taken advantage of the agreement to develop key product lines such as shrimp and pangasius.
Generally, export turnover of the group of agricultural - forestry - fishery products from the beginning of the year until now has recorded an increase of $45 billion, up 14.1 percent compared to the same period last year and is sprinting to achieve $55 billion by the end of this year. Amongst commodities, there are 8 products and product groups with an export value of over $2 billion including coffee, rubber, rice, vegetables, cashew, shrimp, pangasius and wood products.
Ms. Nguyen Thi Thu Thuy, Deputy Director of the Export Support Center under the Trade Promotion Department of the Ministry of Industry and Trade, added that coffee in the Chinese market is forecast to grow at an average of 10.42 percent per year in the 2022-2027 period.
Facing this opportunity, many businesses are accelerating investment expansion to take advantage of the golden opportunity to increase export markets. Mr. Ly Trung Kien, Head of Nestlé Vietnam Group's Logistics Department, said that Nestlé Vietnam will invest additional $130 million to double the capacity of the export instant coffee processing factory and build a center specializing in food production for export to Asia and Oceania.
According to Ms. To Thi Tuong Lan, in order to firmly consolidate and develop their position globally, many seafood processing enterprises have proactively prepared and built a food safety management system in the production chain. These enterprises had exported their goods to difficult markets such as the United States, Japan, and the EU - which require strict standards and processes. Specifically, they have applied the world's high standards to manage the farming and processing systems so that they can respond immediately to unpredictable changes in technical barriers of tough markets.
In order to improve the competitiveness of agricultural products and processed foods, enterprises are necessary to continue to improve agricultural products by applying new technologies in processing and preservation technology. Representatives of businesses proposed to the Government to provide loans for maintaining production as well as give support to stabilize prices for production and export. In the long term, the government should have the land fund for agricultural and aquatic farming, and develop new potential raw material areas.
At the same time, authorities should take heed of national trade promotion programs, in which attention is paid to image promotion, professional branding and general characteristics of the country and the industry. Enterprises will actively link with other firms to form a chain of production and export chains, and enhance competitive advantages in international markets.