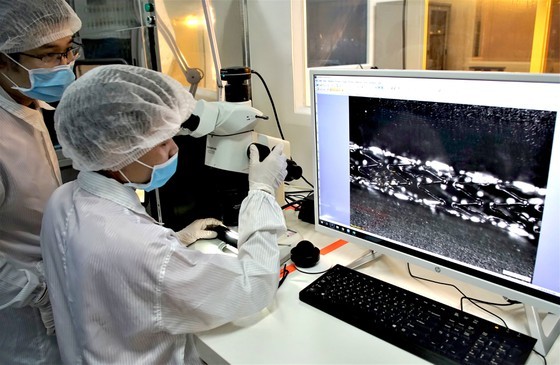 Mr. Shinji Hirai, Chief Representative of the Japan External Trade Organization in Ho Chi Minh City, said that a survey of more than 1,400 Japanese enterprises showed that new investment capital into Vietnam would not increase as strongly as in previous years. It even would tend to decrease slightly because travel between countries remains restricted. New investors who have not directly surveyed the market will actively postpone their investment plans. In contrast, enterprises investing in Vietnam said they would continue to expand their investment scale. Non-manufacturing enterprises would expand more strongly than manufacturing ones.

The forecast of profit by industry of Vietnam shows that the rate of profitable enterprises in the manufacturing sector is 57.5 percent, up 6.7 points; the non-manufacturing sector was 51.5 percent, up 3.3 points. Therefore, when assessing business profit prospects in 2022 in Vietnam, the number of Japanese enterprises expected to improve is 56.2 percent, a slight decrease of 9.6 percent. Therefore, many businesses aim at expanding their investment.

Many European businesses also said they were ready to return and accelerate investment in Vietnam. A representative of the EuroCham Green Growth Sector Committee in Vietnam affirmed that Vietnam was a potential market for investment in clean energy, including wind and solar energy. Because currently, the power demand in Vietnam has increased sharply, while the supply capacity from hydroelectric and thermal power systems is limited.

Some Japanese enterprises said they would focus on promoting investment in the high-tech industry, producing value-added products. At the same time, they would expand the distribution and retail system to increase the market share of Japanese products in Vietnam. Mr. Shinji Hirai said that Japanese businesses evaluated Vietnam as a potential consumption market, with a population of more than 100 million people. On the other hand, the wage regime for Vietnamese workers has increased sharply in recent years, which also contributed to boosting consumption demand in the domestic market.

In addition, the ability to supply domestically produced materials in Vietnam has improved. Therefore, the investment trend of Japanese enterprises has also changed in the direction of investing in high-tech products, such as digital technology, medical equipment, and pharmaceuticals. The form of investment will also change. Instead of only processing some stages for the factories in Japan, those in Vietnam will produce finished products and directly export to many other markets.

Similarly, the American Chamber of Commerce said that there had been many enterprises producing raw materials in Vietnam, which are enough for the production of multi-detailed products with high added-value, meeting the quality requirements of products of the global supply chain. On this basis, US enterprises in Vietnam, on the one hand, have expanded the production investment scale and increased the proportion of purchasing domestic raw materials in the global supply chain on the other hand. Ms. Ho Thi Thu Uyen, Corporate Affairs Director of Intel Products Vietnam Company, said that Intel invested an additional US$475 million in Intel Products Vietnam (IPV) - an assembly and test (ATM) factory with the largest clean room in the global Intel system located in the Saigon Hi-Tech Park, bringing Intel's total investment in Vietnam to nearly $1.5 billion. Previously, Samsung Group was building a Research and Development Center with a scale of more than $220 million to research and develop 5G, big data, and artificial intelligence in Vietnam.

According to foreign business associations in Vietnam, changes in the operating policies of the Government have been creating positive signals for the investment environment. The strategy to increase the localization rate of raw materials has attracted foreign enterprises to invest in Vietnam. On the other hand, Vietnam still has many other competitive advantages, such as lower labor costs than many countries in Asia. Moreover, the advantages brought by the trade agreements that Vietnam has signed help enterprises expand their exports.

Meanwhile, many enterprises said that the investment environment in Vietnam still had many limitations that need to be improved, including increasing raw material prices and declining exports in some markets. Especially, the administrative procedure reform has not been effective in many places, even become more complicated than before. The situation of overlapping between competent authorities and localities remains popular. Some local governments operate policies with a lack of transparency. Electricity infrastructure has not been completed. Besides, the shortage of land funds and the rising rental price of office and factory land are huge constraints to the investment environment. Improving these limitations will be an important foundation for foreign enterprises to develop stably and expand their investment scale, and at the same time create motivation to attract new foreign investment flows into Vietnam in the coming time.