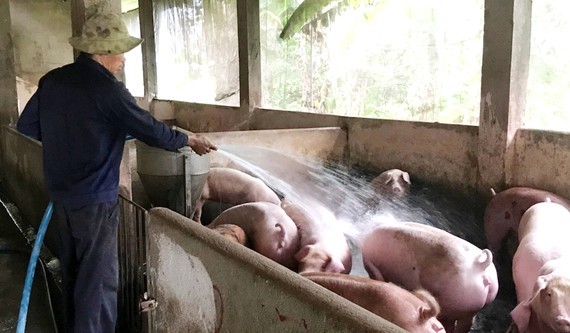 A pig-farming household in Xuan Loc District in Dong Nai Province. (Photo: SGGP)
Ta Duy Thang, Head of VietGAP Pig Farming Group 1 in Xuan Tho Commune in Xuan Loc District of Dong Nai Province, said that live hog prices had increased gradually in recent days and was expected to continue to advance in the near future. Thanks to a stable feed supply, households in his group have been rushing to repopulate pig herds to serve the Tet market. The group has ten members with a total herd of more than 1,000 pigs, so it is expected to provide a significant volume of pork to the market during the upcoming Tet holiday.

Similarly, Le Van Bon, owner of a pig farm in Dinh Quan District in Dong Nai Province, said that local pig herds had been grown well with a stable quantity. The price of live pigs has recovered, so farmers are rushing to rebuild pig herds to timely serve the Lunar New Year.

According to Vice Chairman of Dong Nai Livestock Production Association Nguyen Kim Doan, after localities eased social distancing, the consumption demand for pork began to increase, processing plants have operated normally, so pork prices were from VND47,000 to VND51,000 per kg, an increase of about VND10,000 per kg compared to the beginning of October. Traders in many places even buy at higher prices. Pork prices may continue to advance further in the coming time. However, Mr. Doan was concerned that without supportive solutions, it would be difficult for farmers to rebuild pig herds to serve the Tet market because African swine fever was complicated, and feed prices were high.

In the Mekong Delta, live hog prices have also increased rapidly in recent days. After deducting costs, farmers make a profit of nearly VND10,000 per kg. Although this profit level is quite attractive, many households remain hesitant to rebuild pig herds because the African swine fever still develops complicatedly.  “My farm has more than 1,000 market hogs and breeding stock. Over the past time, I have suffered heavy losses because pork prices dropped while feed surged. I had to depopulate my pig herd. The increase in pig prices will encourage farmers to focus on repopulating pig herds to serve the Tet market,” Truong Thi Le, a farmer in Binh Phu Hamlet in Binh Trung Commune in Chau Thanh District in Tien Giang Province, said worriedly.

In Tra Vinh Province, to ensure pork supply for the Tet market, the authority has implemented many solutions to protect the pig herd, as well as promptly extinguish the epidemic when new outbreaks arise to prevent the spread of the epidemic to other farming households and encourage farmers to have a pig-farming process from disease-free feed to clear-origin breeding stocks. Currently, the total pig herd in the province is over 234,500 heads, which can meet the market demand during the Tet holidays. There are 20-30 percent of local households raising pigs under the biosecurity measures in closed farms.