During the end of February and the beginning of March this year, farmers in Cam Thanh Commune in Cam Lo District, Quang Tri Province have been rushing to harvest the new crop of mulberries. This year, thanks to favorable weather, mulberry trees produce an extremely high yield.

Mr. Tran Van Quoc, a farmer in Tan Phu Hamlet in Cam Thanh District, said excitedly the weather was favorable for this crop, there were fewer rains and floods so his 2-hectare mulberry field yield plenty of fruit with the production estimated at 5-6 tons of mulberries. With a price of VND35,000-VND45,000 per kilogram, he expected to collect VND240-VND300 million for this crop.

According to Mr. Quoc, earlier, the field in Tan Phu Hamlet was used for growing only indigenous agricultural products which often suffer from the risks of unfavorable weather and pests but their prices are unstable. Since farmers shifted to grow mulberry trees, the tree is suitable for soil and gives high efficiency. In recent years, mulberries have been selling heavily, mainly in the provincial market and in Quang Binh and Da Nang provinces. Besides selling fresh mulberries, farmers also produce products made from mulberries, such as mulberry wine and mulberry syrup, to increase the value of their agricultural products. Tan Phu mulberry village is going to release more than 2,000 bottles of mulberry wine and mulberry syrup to the market.

Farmers in Thien Loc, Thuan Thien, and Vuong Loc communes in Can Loc District in Ha Tinh Province are also harvesting wild onion (Allium odorum L.) zealously as they have a bumper crop this year. Mr. Ton Van Truong, who grew 2,500 square meters of wild onion plants in the field of Lang Ngui Hamlet in Vuong Loc Commune, said that the yield of wild onions was 5 quintals per 500 square meters. The current price of wild onions is at VND35,000 per kilogram so he estimated to collect around VND90 million for this crop. 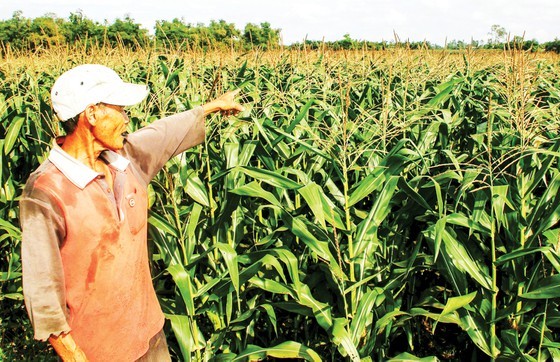 Farmers in the central coastal provinces of Quang Nam, Quang Ngai, Binh Dinh, and Phu Yen were happy because of a bumper crop of vegetables and fruits. In the past decade, farmers in Bau Tron Village in Dai An Commune in Dai Loc District in Quang Nam Province have never been so happy because they both have a good crop of corn and a high price of corn like this year.

Mrs. Tran Thi Hon happily said that traders bought corn at higher prices than previous years, around VND45,000-VND50,000 per dozen of corn, depending on the size, at the field. This crop, her family had 2,000 square meters of corn and collected more than VND20 million.

Similarly, farmers in Pho Khanh Commune in Duc Pho Town in Quang Ngai Province have been enjoying a bumper crop of peanuts. In Cat Hai Commune in Phu Cat District in Binh Dinh Province, the yield of shallots was also much higher than the expectation of farmers.

Mr. Nong Tan Hiep, a farmer in Vinh Hoi Hamlet in Cat Hai Commune, cheerfully said that this year, shallot plants give big bulbs with productivity 5-6 times higher than the previous crop. His family grew 2,500 square meters of shallots. After nearly two months, his shallot field produced 4 tons of shallots, bringing in around VND80 million. His shallots are sold in the province and Southern provinces, even Ho Chi Minh City.

Every year, the agricultural sector of Quang Nam Province provides the market with more than 270,000 tons of vegetables and fruits. Unfortunately, some agricultural products of the province still need to be ‘rescued’ when the export to China is not smooth. The provincial People’s Committee has implemented many measures to find a way out for local agricultural products. It has determined that besides China - the potential market - it will expand the domestic market and other foreign markets.

From 2018 to now, the province has been running the program ‘One commune one product’ (OCOP) that initially created economic models to motivate farmers to promote the connection in the sustainable, planned production. Currently, 107 products have registered to participate in the program. Of these, more than 80 percent of the products are recognized as 3-4 star OCOP products. Within the two years of implementation, the province has supported more than VND25.3 billion for participants to advertise and expand the market for agricultural products. Currently, watermelons and bananas of Quang Nam Province have been granted area code by the Department of Plant Protection under the Ministry of Agriculture and Rural Development and China’s import-export authority.

Along the Con River in Binh Dinh Province, there are green boundless immense cornfields. For being connected with dairy farms, farmers are provided with seeds and fertilizers and enterprises have pledged to buy corn for farmers at stable prices.

Mr. Ly Van Dinh, a farmer in Nhon Khanh Commune in An Nho Town, said that corn is a multipurpose crop of farmers because its fruits can be sold as food to humans and its trunks as animal feed. Every year, 4,000 square meters of corn plants produce 4 tons of corn. The price of corn is VND6,000-VND8,000 per kilogram at the field. Each crop, he collects nearly VND30 million from selling corn. Growing two crops of corn every year combined with animal husbandry gives stable income for farmers, he said.

Mr. Dao Van Hung, Deputy Director of the Department of Agriculture and Rural Development of Binh Dinh Province, said that the province has recently signed contracts with some dairy farms to supply more than 6,000 tons of silage corn per crop. Thereby, the province is able to convert 350 hectares of crops to produce sustainable silage corn. Moreover, the province also promotes convert the rice-growing areas that are lacked water or affected by saltwater to grow other crops, including sesame, bean, shallot, mulberry, and other specific agricultural products with the stable domestic market.