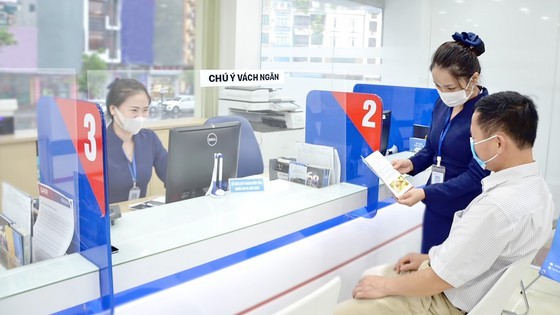 Banks have increased input interest rates because higher demand for capital mobilization when credit accelerates has urged them to raise interest rates to compete with other investment channels, such as real estate and securities. Market survey shows that currently, deposit interest rates at commercial banks are at 5-6 percent per annum for a 12-month term.

However, the highest interest rate of many commercial banks has climbed up to nearly 8 percent per annum, depending on the deposit amount and term. And yet, many commercial banks also said that the savings interest rate in the second quarter will inch up slightly by 0.03-0.06 percentage points and will surge by less than 2 percentage points for the whole year.

In the context of increasing input interest rates, many enterprises said that they are looking forward to the management agencies deploying the 2-percent interest rate subsidy package with the scale of VND40 trillion (US$1.73 billion) from the budget. However, many businesses worry that although the interest rate support package has not been implemented yet, the lending interest rate has risen. Therefore, it will be difficult for them to access low-interest-rate loans as expected to recover production activities.

According to a construction company in HCMC, although the maturity date in early May has not been reached yet, its lender has already announced that it will increase its interest rate by 0.5 percentage points compared to the current interest rate.

“It will make it difficult for businesses because all costs, such as transportation, warehousing, construction materials, and labor costs, have soared. Meanwhile, the capital mobilization channel by corporate bonds also faces difficulties after many scandals about real estate corporate bonds in the market over the past time," the representative of this company said.

Information from many small and medium-sized enterprises in HCMC also shows that, although many commercial banks have launched support packages with interest rates at 5-6 percent per annum, it is difficult for businesses to access because they are not eligible for loans.

Despite the above fact, many economic experts said that lending interest rates in priority areas would still be controlled at a low level.

Many commercial banks increase deposit interest rates to attract capital. (Photo: SGGP)
An expert at VnDirect Securities also said that inflationary pressure is unlikely to reverse the SBV's monetary policy, at least in the next 3-6 months. According to him, the SBV will maintain the loose monetary policy at least until the end of the second quarter of 2022. In addition, the SBV still prioritizes the goal of maintaining low lending interest rates to support businesses and the economy to recover after the pandemic, so lending interest rates in the production and business sector will remain at a stable level.

The SBV has also directed credit institutions to reduce lending interest rates by 0.5-1 percentage points in 2022 and 2023, especially in priority areas. In Ho Chi Minh City, commercial banks said they would reduce lending interest rates for businesses and suppliers in the supply chain of goods in the market stabilization program this year. Specifically, they would offer a decrease of about 1.6 percentage points compared to the previous year, at 5.9-6.4 percent per annum for short-term loans and 6.5-10 percent per annum for medium and long-term loans.

The leader of a commercial bank in HCMC said that although the deposit interest rates have risen compared to 2021, the bank's lending interest rates would remain low in 2022. Maintaining low lending rates is not only to implement the direction of the Government and the SBV but also to reduce operating costs by increasing services to attract cheap capital flows when the ratio of CASA deposits (non-term deposits) is increasing. This move helps banks maintain low lending rates.

“Shortly, when the Government deploys the interest rate support package, about VND20 trillion of interest rate aid will be injected, equivalent to about VND1 quadrillion ($43.24 billion) of cheap credit to help businesses recover from the pandemic. Thus, enterprises should not worry about the high lending interest rate," said a leader of a commercial bank.

Over the past time, the SBV has strictly controlled monetary indicators to ensure the ability to control inflation not only for this year but also for the following years. Specifically, the credit growth target has always been strictly controlled by the SBV by offering many solutions to direct credit flows into production and business sectors and limit credit to risky areas. Besides, the SBV also has many measures to stabilize market liquidity and maintain a reasonable interbank interest rate level.

These factors have contributed to controlling inflation in the past time. It is also the basis for reducing interest rates or maintaining low lending rates to actively support the recovery of businesses.