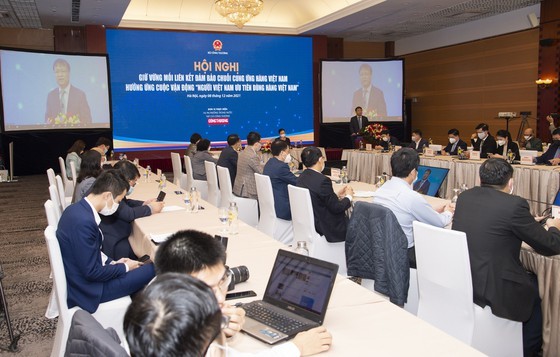 At the conference
Deputy Minister Do Thang Hai said that the conference aimed to maintain the link for the connected supply chain of Vietnamese goods in response to the campaign "Vietnamese people use Vietnamese goods" according to the Government's Resolution 128 on "Safe, flexible adaptation and effective control of the Covid-19 epidemic".

Emphasizing the role of Vietnamese goods, Mr. Hai said that although the epidemic wave had seriously affected people, businesses and the supply chain of production and distribution of goods, it also helped witness the intense vitality of Vietnamese goods and the extremely important role of the domestic market in the Vietnamese economy.
Because of the epidemic, many countries in the world shut the door; therefore, the supply and demand were disrupted, and many economic indicators dropped, the domestic market still protect the economy from fluctuations.
Deputy Minister Do Thang Hai announced that Vietnam has been successful to keep the connected supply of essential goods and controlling commodity prices in the market, even in epidemic-hit localities such as Ho Chi Minh City, Bac Ninh, Bac Giang, Binh Duong and in localities implementing the government’s Directives 16 and 16+.
According to Mr. Do Thang Hai, in the first 10 months of this year, the total retail sales of goods and services decreased by 8.7 percent over the same period last year due to the stagnation in tourism and aviation services, but retail sales of goods and services in November grew by 6.2 percent compared to October.
Deputy Minister Do Thang Hai proposed to continue promoting the campaign "Vietnamese people use Vietnamese goods".
The industrial production index in November continued to prosper when localities implemented Government Resolution 128, with an increase of 5.5 percent over the previous month and an increase of 5.6 percent over the same period last year.
In general, the 11-month commodity production index still increased by 3.6 percent against 2020.
Deputy Minister Do Thang Hai informed that, the Ministry of Industry and Trade has issued Directive No. 12 on solutions to balance the supply and the demand as well as stabilize the market at the end of the year and the Lunar New Year of the Tiger 2022 to help businesses and localities to overcome difficulties.
Last but not least, the Ministry will continue working with localities to support businesses in solving the current bottlenecks hindering activities in production and circulation.
To maintain a sustainable production chain of Vietnamese goods in adaptation to the new situation according to the government’s Resolution 128, especially in the last months of the year, Ngo Khai Hoan, Deputy Director of the Industry Agency under the Ministry of Industry and Trade, suggested that businesses should proactively develop production plans because the epidemic could last up to some years later.
In addition, a business should quickly resume recruitment and training workers, especially in high-intensive industries such as leather and footwear, electronics, food processing due to the shortage in the past time and shortage of laborers. Moreover, companies should have flexible policies on overtime and pay extra remuneration for on-site workers, support child care for employees.
Businesses also need to closely coordinate with state agencies when implementing the Government's Resolution 128, voicing their opinions of shortcomings to avoid traffic jams while transporting goods as before. 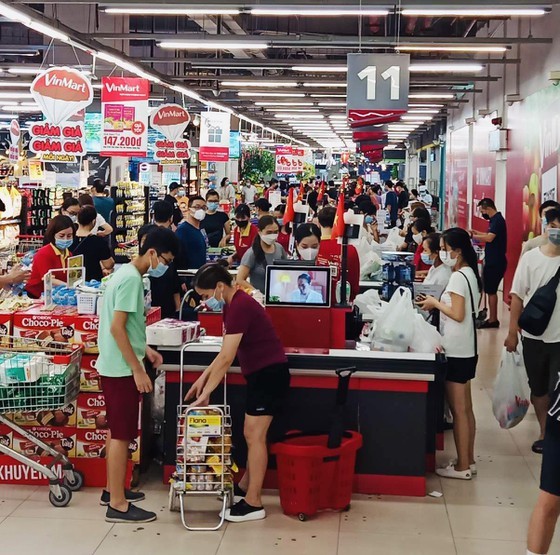 The domestic retail market has recovered in November, 2021 after months of social distancing
Along with that, state management agencies and local authorities also need to agree with each other when implementing the Government's directions to ensure enough raw materials for production.
Speaking at the conference,  Deputy Director of the Ho Chi Minh City Department of Industry and Trade Nguyen Nguyen Phuong suggested the launch of the campaign "Vietnamese people give priority to using Vietnamese goods” to encourage people to use domestically-manufactured goods. However, he emphasized that local producers must improve their products' quality to attract consumers.
According to Mr. Phuong, currently, Vietnam has not had clear standards and regulations of product quality, poor-quality goods can still be sold; as a result, manufacturers are not under pressure to have responsibility for their products. In fact, Vietnamese enterprises completely produce goods that meet the standards for export to major markets such as the US, Europe...