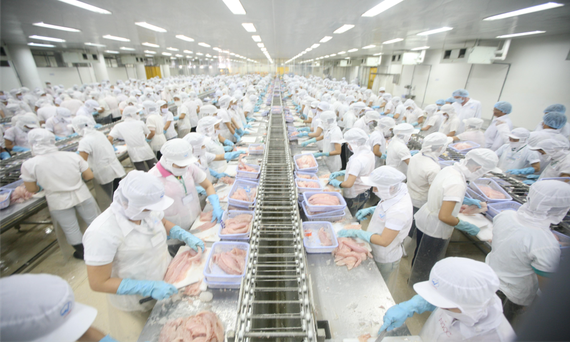 Vietnam's GDP growth this year has been predicted at 5.3 percent by the WB. (Photo: SGGP)
The projection was made in the WB’s East Asia and Pacific Economic Update, April 2022 titled “Braving the Storms” that was launched virtually on April 5.
East Asia and Pacific Chief Economist Aaditya Mattoo said Vietnam is one of the economies that the WB has strongly downgraded forecasts for growth indicators.
Though the prediction has been revised down to 5.3 percent, it is just the baseline scenario. The growth could stand at only 4 percent in the lower-case scenario.
Explaining the revision, he pointed to the difficulties caused by the Omicron variant of the Covid-19 pandemic, which has led to a surge in infections; considerable impacts of oil import which is equivalent to 3 percent of the GDP; and higher import prices of other materials like iron and steel.
Though Vietnam was recognized as one of the countries that have gained the most advantages and made the most use of opportunities to expand trade, that fact has also made it more vulnerable to external shocks. This means the country needs to be more successful in building and completing its social security system, according to the economist.
In its economic update, the WB predicted overall economic growth for East Asia and the Pacific at 5 percent in 2022, 0.4 of a percentage point less than expected in October. If global conditions worsen and national policy responses are weak, growth could slow to 4 percent.
It said the war in Ukraine threatens the uneven recovery of developing East Asia and Pacific countries from the Covid-19 shock.