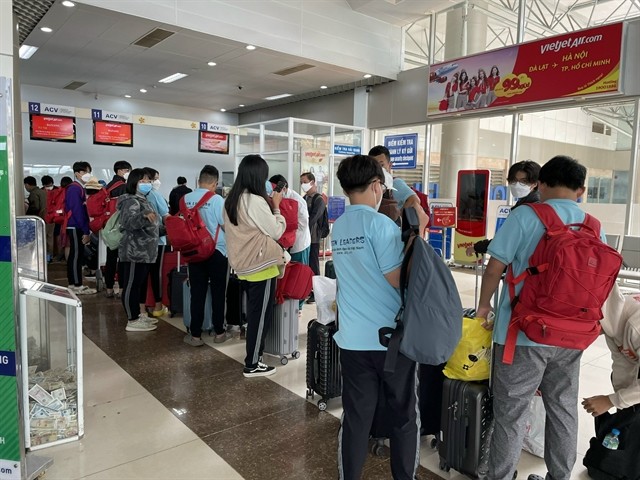 People check in at Lien Khuong airport in Da Lat City. Recovery in tourism along with spikes in domestic demand, FDI have contributed to Vietnam's high growth this year. (Photo: VNA)
In its quarterly update of the ASEAN+3 Regional Economic Outlook released on Thursday, Vietnam’s economy is projected to expand by 7 percent in 2022, up from 6.5 percent in its July forecast and making it the second-highest gainer in the region this year after Malaysia with expected growth of 7.3 percent.
Vietnam’s GDP will likely slow down in the next year to 6.5 percent, topping the region and followed by the Philippines at 6.3 percent.
AMRO’s forecast followed recent moves by Moody’s, the World Bank (WB), the International Monetary Fund (IMF) and the Singapore-based United Overseas Bank (UOB) which forecast Vietnam’s 2022 GDP will reach between 7 percent and 8.5 percent.
“Vietnam is doing well,” said AMRO chief economist Hoe Ee Khor at the October 6 meeting.
Though attributing the high GDP growth partly to the low base from last year, Dr. Khor said the opening up of the economy, relaxation on pandemic control, increase in domestic demand, recovery in tourism and successful attraction of foreign direct investment (FDI) all contributed to Vietnam’s quick recovery.
“On top of that, the Government’s policy is quite supportive this year. So, because of all these factors, we expect Vietnam’s economy to grow strongly,” Khor said.
However, Khor pointed out an external risk of import inflation coming from high oil prices.
“I mentioned the Vietnamese Government has cut taxes to curb inflation, but that’s not sustainable or the switch you need to refer back to normal,” Khor said, adding the Government needs to start raising the policy rate to contain coming inflation.
For the first time in two years, the State Bank of Vietnam (SBV) decided to raise its policy rates by one percentage point on September 23.
SBV’s move was deemed inevitable as the FED has been raising interest rates, subsequently putting pressure on exchange rates.
Khor also endorsed the Vietnamese central bank’s move, emphasizing Vietnam’s economy is already recovering very strongly and there’s no need for monetary stimulus at this point in time.
“The focus is shifting from supporting growth to containing inflation,” he said.
Vietnam’s inflation is expected to reach 3.5 percent this year and drop slightly to 3.3 percent in 2023.
This year, most countries are forecast to see their inflation surpass their targets but in the case of mainland China, Hong Kong (China) and Vietnam, the expected inflation by year-end will be under the ceiling target.