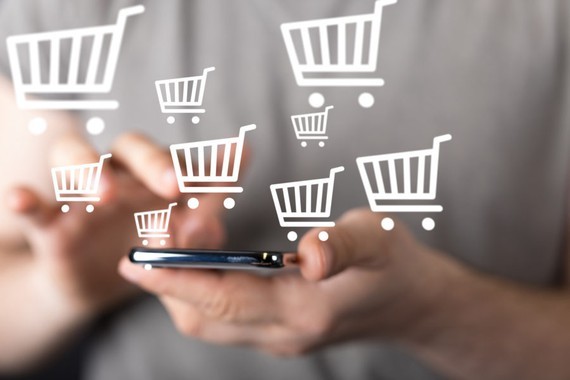 Illustrative photo
Therefore, the expectation that the e-commerce platform in Vietnam can be competitive enough to avoid dependence on outside factors will face many challenges and will also be difficult to overcome too soon in the future.

According to an overview report of e-commerce businesses in the first half of 2022 by the Metric Data Research Company, Vietnam is fast becoming the second-largest market in Southeast Asia, after Indonesia, in growth and development after the Covid-19 pandemic in this field. Metric Data Research Company report shows that Shopee, Lazada, Tiki, and Sendo are the four most prominent e-commerce platforms currently operating in Vietnam. Shopee in particular holds the largest market share with sales of up to VND43.12 trillion, accounting for 72 percent of the market share from November 2021 until May 2022. In second place is Lazada with a market share of 20.9 percent, equivalent to VND12.54 trillion. Tiki and Sendo are e-commerce platform names that immediately follow Shopee and Lazada.

Considering the number of visits, Shopee is also leading in number of customers. According to data collected in the month of February 2022, the total number of visits on Shopee were 78.5 million, Lazada had 14.8 million, and Tiki had 14.1 million. In the ranking of mobile applications such as Android or iOS, for shopping in Vietnam, Shopee was also the most used application followed by Lazada and Tiki, respectively.

In the top four outstanding e-commerce platforms in Vietnam today, Shopee and Lazada are the two foreign giants, while Tiki and Sendo started out as domestic enterprises, but now foreign investors hold a controlling stake in them. As of August 2020, Tiki had total foreign ownership of up to 54.5 percent. Later, this e-commerce platform transferred 90.5 percent of shares to the new legal entity Tiki Global in Singapore. Now, Tiki has become a Singapore based enterprise. With Sendo, the starting point was as an e-commerce project developed by FPT Online Services Joint Stock Company in September 2012. However, after many rounds of fundraising, by May 2020 foreign investors bought a controlling share in Sendo with more than 65 percent of shares.

The attraction of Vietnam's e-commerce market also entails the participation of social networking platforms such as Facebook, TikTok, and YouTube. This year the E-Commerce Index Report (EBI) recently published by the Vietnam E-Commerce Association announced that the leading social network supporting buying and selling in Vietnam are now all foreign. This shows the attraction of Vietnamese e-commerce platforms in the eyes of foreign investors.

Accordingly, Vietnam's e-commerce revenue in 2021 was estimated at US$13.7 billion, up 16 percent compared to 2020 and accounting for 6.5 percent of the total retail revenue of the country. The EBI report assesses that the growth rate of Vietnam's e-commerce in 2022 may be the highest ever thanks to good control of the Covid-19 pandemic. According to Statista, Vietnam's e-commerce market will continue to grow strongly, possibly reaching the $39 billion mark by 2025. Vietnam has now added eight million new digital consumers since the beginning of the pandemic until the first half of 2021, with more than half of the consumers coming from areas that are not big cities.

In the face of an overwhelming dominance of foreign-invested e-commerce platforms in the domestic market, some argue that it is necessary to develop a Vietnamese e-commerce platform that is competitive enough to avoid dependence on foreign companies.

Speaking to Saigon Investment, Mr. Nguyen Ngoc Dung, Chairman of the Vietnam E-Commerce Association, shared that the Association does not distinguish between domestic and foreign investors. According to Mr. Dung, the idea of developing a domestic e-commerce platform to compete with Shopee, Lazada, or Tiki to avoid being dependent on foreign investors is very difficult because they have been ahead in this business for many years. Moreover, the large e-commerce floor is still pouring in money to capture market shares, and most of them are not yet profitable. The amount of capital poured in is not small, so if domestic enterprises do not determine to call for investment capital, it is very difficult to break into this platform independently.

To see more clearly why it is difficult for domestic enterprises to enter the game of e-commerce platforms, we take the example of Tiki. This company was established in 2010 and started operations in 2012. Since then, Tiki continuously received investments from domestic and foreign investors. Especially in the context of the Covid-19 pandemic affecting many countries, Tiki still completed the series E funding round, with an additional $258 million in its capital.

To the question of whether Vietnam can do the same as China with its e-commerce platforms dominating the domestic market with reach to foreign countries, many people think that this is difficult or even impossible. Because China has special support policies for domestic businesses operating in developed countries, and if Vietnam wants to develop in the same way, it must also have the support of the State, which will not be easy.

In fact, Vietnam has had the participation of domestic investors and in previous years we also had domestic names with high expectations such as Vuivui.vn; and adayroi.com, but then these names all had to leave the market. Vuivui.vn of Mobile World was established with many expectations but closed after only two years of operations.