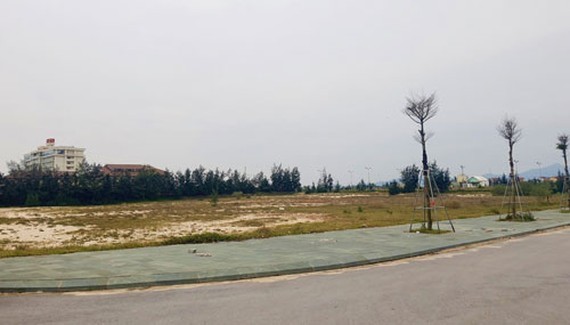 These cities are currently planning to restructure certain locations under categories ‘diamond land’ and ‘golden land’ to distinguish land areas for various relocation programs for the people. However, it is still to be seen what exactly these cities will do with these vast tracks of land after acquiring them.
Vast tracks of public land

On the occasion of the ‘Vietnam Urban Sustainable Development Forum’ held on 17 June, Deputy Prime Minister Le Van Thanh asked not to resolutely sacrifice welfare works to develop commercial and residential areas. He emphasized that in the last thirty years of urban planning most of the cities in Vietnam had been quick to develop high-rise apartment blocks, huge office buildings, luxury hotels, and other such commercial urban facilities, but not much attention had been paid to public works such as kindergartens, schools, parks, flower gardens, playgrounds, and open public squares. There was still a great shortage of such spaces.

This direction of the Deputy Prime Minister is very feasible, and many people are optimistic that on the occasion of the recovery of thousands of hectares of public land, the development will be more towards public works. It is now to be seen how these big cities will approach future development plans and what challenges await public authorities in the development process.

The type of land that is in abundance under the relocation program is office land, for offices of state agencies, socio-political organizations, universities, and public colleges, in the outskirts of city areas. After expanding from 900 square kms to 3,350 square kms, Hanoi has arranged for the restructuring of land in the outskirts of the central area for 28 ministries and branches to be relocated from the inner city areas. About ten agencies have already moved to their newly located headquarters. According to the restructuring program, Hanoi is finally relocating state agencies from six inner city districts.

Ho Chi Minh City has also moved more than ten universities outside the city area which include seven member schools of the National University. Some representative offices, branches of ministries, and central ministerial level agencies have also been narrowed down for this purpose.

Another type of land that comes under the relocation program is the land for factories and industrial clusters. In terms of quantity, this type of land is not much, but the area of each single unit is very large. Among them there are factories that have completed the relocation process, while some have to move soon because they will not be allowed production facilities, due to crowded worker areas and pollution within the inner city limits. The industrial cluster factories that Hanoi will relocate covers 300,000 square meters, and includes the Hanoi Brewery, Thang Long Tobacco Factory, Gia Lam Railway Factory, and the Duc Giang General Petroleum Warehouse.

Ho Chi Minh City has basically relocated factories and production facilities out of the central districts and moved them to industrial zones. At this point, the city will have to make a calculated plan for industrial parks that have expired their lease term, such as the Tan Thuan export processing zone which covers 300 hectares. In addition, a number of land areas leased by businesses for hotels, offices, and restaurants have also expired their lease term.

Under the restructuring program, hundreds of housing projects, as well as industrial and residential projects that cannot be developed will have to be withdrawn due to many reasons such as investor incompetence or inability to clear the ground area, or entanglement in legal procedures, or even for not bidding. So far Hanoi has withdrawn 37 projects with a total area of 1,878 hectares. Ho Chi Minh City is also reviewing projects that cannot be implemented so as to recover and use this land for other purposes, which in actuality covers thousands of hectares of valuable land.

Land for effective use

Although the restructuring program has recovered vast tracks of land for public works, there are several difficulties arising when putting this land to effective use. The People's Committee of Hanoi said that agencies of some ministries have been allocated land and even though some agencies have completed construction, many people in these agencies do not want to move. Although some have already moved, but so far, no ministerial or ministerial level agencies have returned the land back to the city but have kept it for their own operations. These ministries come under the Central Government and are not under the management of the People's Committee of Hanoi, hence they do not have the right to revoke orders.

A similar situation prevails for state universities located in Ho Chi Minh City. Although there are external campuses, such as seven schools and four institutes of the Vietnam National University in Ho Chi Minh City, including the Linh Trung campus in Thu Duc city with an area of 647 hectares, so far, no school has paid Ho Chi Minh City for even a square meter of land. Although many offices, branches, and agencies of ministries in Ho Chi Minh City are not yet active, they cannot be recovered like they can in Hanoi.

This is also happening in other cities such as Quy Nhon City, which has three hotels located close to the sea. Among these, two hotels have already expired their lease term since 2019. While the People's Committee of Binh Dinh province wants to withdraw and return the beach to the people, they feel handicapped under regulations.

There are vast tracks of both categories of ‘diamond land’ and ‘golden land’ in Hanoi and Ho Chi Minh City located in prime areas in central districts, especially land under industrial zones. Because this land area is large, it has been turned into residential areas, rental buildings, commercial centers, service activities, and car parks for commercial gains. However, if this area is converted into parks or schools then in the eyes of real estate traders and some managers it will be considered wasted because of lack of profits. Therefore, it is not easy for leaders to opt for low profit ventures such as parks and schools as opposed to building hotels and shopping centers.