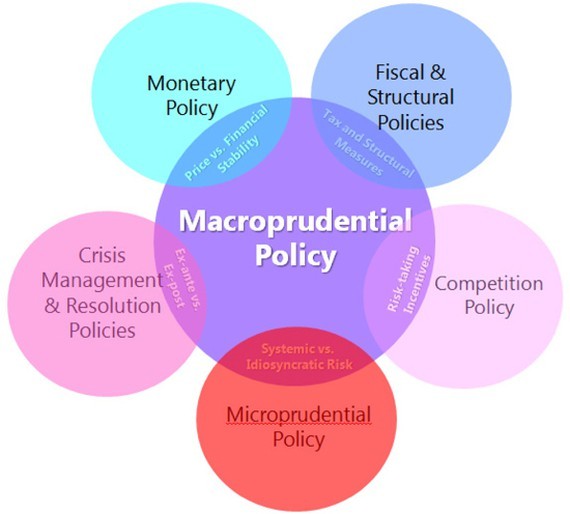 (Illustrative photo)
However, how effective will be the tool of Prudent Macroeconomic Policy (PMP) in regulating credit activities in Vietnam is yet to be seen.
Prudent Macroeconomic Policy
In recent years, many countries have been experiencing cycles of credit and property price explosion, which has been one of the causes of a serious financial crisis. To cope with such cycles, policymakers in many countries have used tools of Prudent Macroeconomic Policy (PMP) as the first line of defense against risks of economic uncertainty. PMP can be understood as a law or a regulation, or as a condition issued by competent government agencies and observed by banks and other concerned institutions so that the entire financial system can be protected against possible risks.
A report by the Organization for Economic Cooperation and Development (OECD) shows that Asian countries adopted several PMPs in 2021 in an effort to minimize systematic risks as well as maintain the stability of their financial systems by coping with the consequences of a crisis. Some countries that use the PMP tool to monitor multiple goals include China, India, Malaysia, Singapore, and the Philippines. On the other hand, Laos focuses mainly on dealing with risks arising from the exchange rate sensitivity, while Vietnam concentrates heavily on credit growth.
In order to address the imbalance of the housing market and the increase in housing prices, some emerging countries, including Vietnam, use limitations on the loan-to-house value ratio, the debt-to-income ratio, or other conditional restrictions on loan characteristics. In particular, these countries have implemented many non-traditional PMP measures, including limitations on credit growth such as in Brunei Darussalam, Vietnam, China, and India; regulations on provisioning for risks of loans such as in Brunei Darussalam, Vietnam, China, India, and the Philippines; or taxes applied for PMP for transactions, assets, or liabilities such as in Malaysia, Singapore, and China.
PMP and other monetary policies may have some kind of relationship because both monetary policies and PMP are able to influence prices and financial stability conditions, so they can be considered to be mutual support strategies. To successfully deal with risks arising from financial imbalance, by tightening PMP we will be able to reinforce the monetary policy when it is imperative to fight against a situation of imbalance.
PMP and credit growth
PMPs in Vietnam have been improved in recent years. Circular 36/2014/TT-NHNN sets out credit monitoring criteria, including minimum capital adequacy ratio, credit limits, solvency ratio measured by a liquidity reserve ratio, the maximum ratio of short-term funds used for medium and long-term loans (SFML), and the ratio of outstanding loans to total deposits.
Among these regulations, the SFML is controversial, and its application has changed several times such as in 2020 when the State Bank of Vietnam (SBV) revised the regulation introduced in 2019. Because the mobilized capital of commercial banks focuses a lot on short-term capital, banks tend to take advantage of short-term capital for medium and long-term loans to bring about high profitability. With the tightening of SFML, banks will have fewer business opportunities and take higher risks when using short-term capital for medium and long-term loans, probably resulting in lower profits. However, this regulatory tool can be effective in the long run.
According to the authors' statistics from the SBV data, the average total credit growth rate in the period between May 2013 and December 2019 was 15.3%, and there was growth in all the months, with the lowest growth rate of 10.3% and the highest of 22.3%. Figure 1 shows the credit structure by the business sector between May 2013 and December 2019.
Therefore, the official statistics indicate that credit in Vietnam is not concentrated in the construction business. This business area causes lots of concern because the current regulations state that construction is part of real estate business activities1. However, SBV credit allocation statistics show that industrial credit growth is the lowest among the sectors, and the proportion of credit to industry accounts for a lower proportion in the credit structure. This signal is a considerable concern because the industry is the field of goods production, an area that should be prioritized for development to promote sustainable economic growth.
To find evidence of the impact of the PMP tool on credit growth in Vietnam, we have carried out a quantitative analysis based on the SFML dependent credit growth model, economic growth, and other macro variables. Our estimates show that when PMP is tightened, that is lower SFML, credit growth will also decrease. SFML of commercial banks with the dominant capital from the State has a remarkable effect on the total credit growth. This is also consistent with reality, because the four largest commercial banks in Vietnam all have dominant State-funded capital. These banks are, Bank for Investment and Development of Vietnam (BIDV), Joint Stock Commercial Bank for Foreign Trade of Vietnam (VCB), VietinBank, and Vietnam bank for Agriculture and Rural Development (Agribank).
This result has reflected the effects of the PMP tool in Vietnam. When we lower the maximum ratio of short-term capital for medium and long-term loans, the total credit growth will fall, and credit will focus more on the production and trading of goods. This shift can create stability and sustainability for the entire economy. However, compared to the goal of PMP, the SFML tool has a more positive effect.