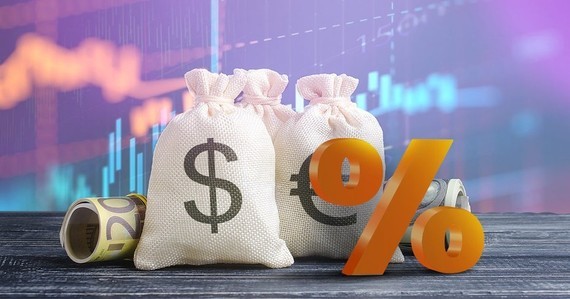 Illustrative photo
There is a balancing act between keeping inflation under control and also providing stable economic growth. While speaking with Saigon Investment, Dr. Tran Du Lich, a member of the National Financial and Monetary Policy Advisory Council, said that Vietnam's monetary policy must prioritize strengthening the value of the Vietnam Dong to maintain macroeconomic stability.
JOURNALIST: - Sir, the US Federal Reserve (FED) has continuously been raising the interest rate, so how should Vietnam react to many experts still thinking that our country has many advantages?
Dr. Tran Du Lich: - The fact that the FED has just increased the basic lending interest rate by 0.75 percent in a range of 3 percent to 3.5 percent per year and may increase further by the end of the year to reduce the high inflation rate which is at the highest level in the last 40 years in the US, will also gradually reduce the inflation rate in the medium term to 2 percent per year.
Increasing interest rates and tightening credit will certainly slow down economic growth, but the US also calculates on avoidance of an economic recession. From the beginning of the year to this point, Vietnam's economy has been growing positively by maintaining a stable macroeconomic foundation, but in my opinion, it cannot be subjective, because the resilience of the economy to world economic fluctuations is still the most worrisome factor today.
- Sir, the US Dollar has continuously peaked against other currencies, even with the EUR from more than one and a half times. How strong is the resistance factor of the Vietnam Dong in your opinion?
- It is true that the index measuring the value of the US dollar against major currencies on the world market has risen to the highest level in recent decades. Not only the EUR, but the AUD, CAD, and British pound currencies have all depreciated against the US Dollar.
Over the years, the State Bank of Vietnam has been quite successful in flexibly handling exchange rates in response to market fluctuations. With the characteristics of an export-oriented economy and a large openness, balancing the exchange rate in order to keep the export market and not import inflation, and increasing input costs for domestically produced goods is still a goal to pursue. I must say this is a difficult problem.
However, in my opinion, Vietnam still has to give priority to strengthening the Vietnam Dong value to maintain macroeconomic stability. Currently, the Japanese Yen and some regional currencies have fallen sharply against the US Dollar, while the Vietnam Dong is considered to be relatively stable compared to regional currencies, so maintaining stability in coming times should be considered a priority goal of our monetary policy.
- Sir, at the recent Socio-Economic Forum 2022, a representative of the State Bank of Vietnam still maintained the view that the policy was tightened, thereby still not allowing credit growth above 14 percent. Will this hinder the recovery of businesses, and will the Government's 2 percent interest rate support policy be opened when the cash flow is squeezed to curb inflation?
- As mentioned above, the current monetary policy should give priority to responding to fluctuations in the world economy and increasing the resilience of the economy. The State Bank of Vietnam has kept its credit growth target of 14 percent this year and by the end of August has used about 10 percent, with the remaining level by the end of the year being less than 4 percent. With a credit balance of about 140 percent of GDP, Vietnam is in the group of countries with the highest credit balance according to international organizations, so the extension of credit must be very cautious. In my opinion, increasing the credit scale of the commercial banking system is necessary, but more important is where the credit flows in the economy.
In the economic recovery program under Resolution 43 of the National Assembly and Resolution 11 of the Government at the beginning of the year, a support package of VND 347,000 bln was issued, of which VND 40,000 bln was used to support a 2 percent interest rate for those affected by the Covid-19 pandemic. However, the support package is quite slow in disbursement, and it is necessary to prioritize the implementation of this credit channel in the remaining credit quota in the last months of this year and by early next year.
In addition, it is necessary to coordinate with the disbursement of public investment, coordinate the implementation of fiscal and monetary policies, and improve the efficiency of the capital flow of the two channels of public investment and credit of the commercial banking system. At the same time, it is necessary to clear the channel of corporate bonds and other financial instruments on the stock market, rather than push the capital burden in the medium and long term onto the monetary policy.
- Sir, what will Vietnam's economic growth be like in 2022, and will it reach the set target as all financial institutions think it can also be surpassed?
- I think this year's GDP can completely exceed the planned target of 6.5 percent to 7 percent, and maybe even over 7 percent. However, the growth rate is higher than the low level of 2021 which was only a 2.51 percent increase. In 2023, the growth rate will be lower than this year's high, especially when the world economy is forecast to slow down, even indicating the risk of a severe recession. Therefore, in my opinion, the goal of increasing GDP is necessary, but in the current situation, monetary and fiscal policies must prioritize strengthening the resilience of the economy against the fluctuations of the world economy.
- Thank you very much.