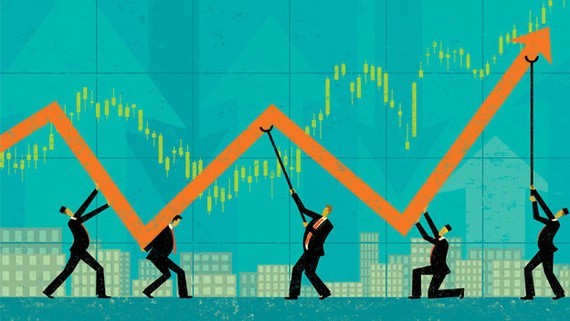 Illustrative photo
Now more problems have arisen with rising gasoline and oil prices that have created bottlenecks in growth momentum along with high inflation.
Need for solutions
Recently the Ministry of Finance submitted a draft Resolution to the Standing Committee of the National Assembly on reducing the environmental protection tax rate for gasoline and oil. It is proposed in the Resolution to reduce environmental protection tax from VND 2,000 per liter to floor level of VND 1,000 per liter, in order to curb rising inflation. However, the Ministry of Finance still keeps the same rate for Special Consumption Tax (SCT) and Value Added Tax (VAT) for gasoline. While these two taxes are on a relative value, when the tax base is larger, then more tax is collected and forms a large component of the current gasoline selling price.
Previously, many experts had suggested that authorities must consider reducing these two taxes. During one session, a member of the National Assembly told the Minister of Finance that although the decision-making authority rests with the National Assembly, the opinion of the Ministry itself played an important role. This can be deduced as saying that it is essential whether the Ministry wants to or not, not whether the National Assembly agrees or not. Many National Assembly deputies agree with tax reduction options, so it is not too difficult to consult the National Assembly.
The views of the delegates who questioned the Minister of Finance have now been added in the draft. According to the Ministry, it is not possible to reduce the Special Consumption Tax because the Law on SCT does not provide for tax reduction for taxable goods and services. More importantly, the Ministry said the SCT is only levied on gasoline, not on oil, and that oil is the main commodity for production and business.
It is true that gasoline may not be the main input for production and business, but this fuel is one of the main consumption products of the people. The increase in gasoline prices may not have much impact on production and business, but this is the main factor that is eroding current aggregate demand. If there is no demand, then supply cannot recover, and when the purchasing power decreases, businesses are unable to sell goods.
The Ministry of Finance has also said that the law on VAT does not provide any tax reduction. Just as in Resolution 43/2022/QH15 on the program on socio-economic recovery and development, the National Assembly decided not to reduce taxes on items subject to SCT, including on gasoline. It can be seen that the explanation of the Ministry of Finance is closely following the draft Resolution, but this way of putting the problem will be very difficult to solve the current inadequacy. Therefore, if we use these documents as a thinking base for the policy making process, all scenarios will be deadlocked.
The logic used by the Ministry of Finance to reject the proposal to reduce SCT and VAT may make the public think that the Ministry is trying to use the previous views of the National Assembly. We are in a period of drastic economic change. The key to support is to find a solution, not a rule. If the solution is beyond regulations, it is recommended to adjust the regulations accordingly. Currently, the way is available, but the problem is that the Ministry of Finance, which is the governing body responsible for the draft, has to propose appropriate adjustments to the limitations in policy space.
No ideal scenario
The ability to disburse the support packages to stimulate demand and the ability to control inflation will be the two most important scenarios ruling the remaining half of the year. Ideally the best scenarios would be that inflation is contained with the cooling of energy, food, and production input costs; with the Russia-Ukraine conflict coming to an end; the global supply chain being once again fully restored; and the domestic demand stimulus package disbursed as per schedule. This will help the aggregate supply and aggregate demand to increase synchronously, ensuring higher growth as well as keeping a check on inflation. However, looking at the reality of the ongoing crisis worldwide, it is difficult to expect this outcome.
The current inflation situation stems from political conflicts and isolation policies of major countries, rather than simple economic problems. Currently, the US Federal Reserve (FED) and some central banks are responding by raising interest rates sharply. In Vietnam, the State Bank of Vietnam is tightening the credit room and has decided to sell foreign currency. Although there has not been a step to raise interest rates like other central banks, the current policy performance of the State Bank of Vietnam shows similar points and may face pressure to raise interest rates in the near future. If an interest rate increase occurs, there may be more disadvantages than advantages.
Vietnam has just come out of the drastic pandemic this year. Increasing interest rates will make loans more expensive, financial conditions will tighten further, production will be difficult due to low capital while aggregate supply has not yet recovered, which all will contribute to further inflation. Inflation itself is also like a heavy tax and it is levied on the entire population. Therefore, we should consider the current petrol tax reduction to partially alleviate this situation, as well as offer more support for both production and consumption.
Realistically speaking, there cannot be an ideal scenario, hence the most optimal scenario must be considered. This means to sacrifice a few growth points to ensure inflation control and preserve internal resources for the economy. In addition, the world gasoline price is currently increasing, and the income from petroleum exports will also increase more than estimated. Therefore, the management agencies can take advantage of this difference to add to the stabilization funds and lower the domestic gasoline price. Since this is an excess revenue source, such adjustment will not affect the annual budget target plan.