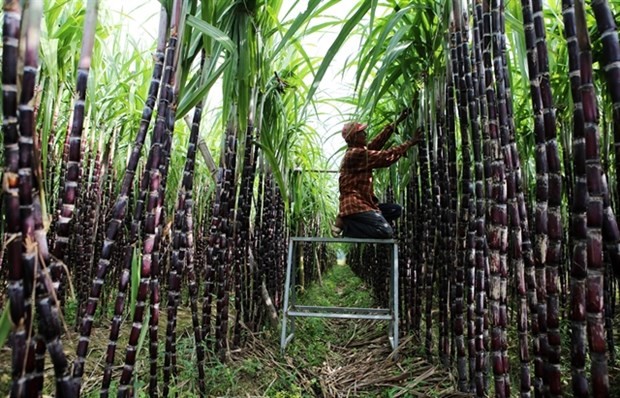 A farmer takes care of his sugarcane farm. Domestic sugar producers must narrow their sugarcane farms to adapt to falling prices (Photo: VNA)
According to the Vietnam Sugarcane and Sugar Association, refined sugar has dropped to around VND18,000 per kilo and unrefined sugar to VND17,200 per kilo since early this year.

The prices are so low that sugar producers find it impossible to cover their production costs. Many have no choice but to cease operation to cut losses.

Meanwhile, smuggled sugar continued to move into the country via southern borders in June and early July, flooding the market. Smuggled refined sugar sold at just around VND16,400, low enough to price out domestic sugar.

Imported sugar fuels the situation by adding to the abundant supply of cheap sugar. Domestic sugar held on to around 20 percent of the market share.

The Trade Remedies Authority under the Ministry of Industry and Trade has recently submitted an investigation report to the Politburo.

The report said several firms in the ASEAN region had committed origin fraud when they exported sugar to Vietnam.

There has been a steep rise in imported sugar from Cambodia, Indonesia, Laos, Malaysia and Myanmar since Vietnam imposed provisional anti-dumping and anti-subsidy measures on Thai sugar.

In Cambodia, Phnom Penh Sugar Ltd. is an exporter that has circumvented the trade remedies applied to Thai sugar. In Indonesia, fraudsters include Kebun Tebu Mas and Sentra Usahatama Jaya.

Meanwhile, due to the trade measures, Thai sugar has begun to plummet by 72 percent since March 2021.

The report also said that some other countries, which have never been sugar producers nor sugar producers with large output, saw their sugar exports to Vietnam suspiciously soaring.

In contrast, domestic sugar has been on the line amid weak demand and an abundant supply of foreign sugar. Domestic firms have to cut back on sugarcane farms to run at low capacity.