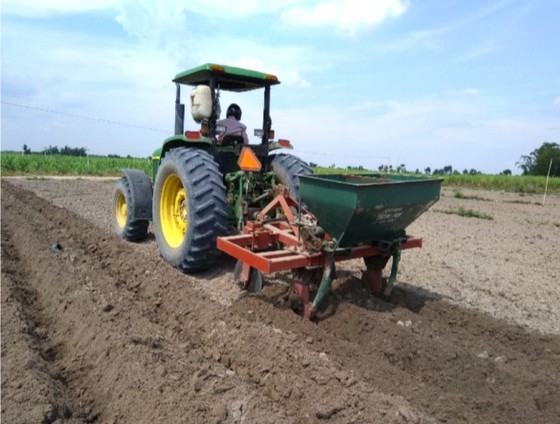 Mechanization has been promoted, but there are still many obstacles that need to be resolved by relevant parties. (Photo: SGGP)
Farmers hardly access good sources of seedlings

Sugarcane - an indispensable raw material in the sugar industry, an important factor creating the appearance of Vietnam's sugar industry - is on the verge of being forgotten when the crop structure is replaced. To promote the conversion of farming from manual agriculture, in recent years, enterprises have actively supported bringing mechanization into the fields.

Some enterprises have even brought the world's leading agricultural mechanical equipment to serve the sugar industry. Unfortunately, the mechanization still faces many difficulties, especially in the condition that the sugarcane growing area remains on a small scale and lacks the systematic planning as currently. This is an important obstacle that farmers and enterprises cannot remove by themselves, but it requires the legal corridors of the State. Until then, farmers and enterprises are still struggling with the problem of the efficiency of sugarcane. As a result, many small-scale sugarcane growing areas could not be maintained, and the sugarcane raw material area is increasingly narrowed.

Due to dependence on imported sugarcane varieties, it is difficult for farmers to approach pure and disease-free sugarcane varieties with clear origins. This leads to the fact that sugarcane farming in many localities is still stuck with traditional farming techniques, while the yield and commercial cane sugar percentage are getting worse and worse due to diseases and seed degeneration, causing many growing areas to convert to other crops due to poor economic efficiency.

Facing that difficult situation, many localities have eliminated sugarcane from the list of priority crops. This makes the sugar industry encounter difficult, especially in areas with sugar refineries. The decrease in sugarcane production has caused sugar refineries to operate inefficiently, production costs to increase, and profits to shrink, which means that the value sharing with farmers weakens.

Regarding the problem of developing the sugarcane raw material area, according to Prof.-Dr. Vo Tong Xuan, to restore and develop the sugarcane area, in production, there must be the organization in the direction of cooperating and establishing associations and cooperatives of sugarcane growers for each region and each factory, then developing into provincial associations, and this factor will create a close association for efficient production.

From this fact, the costs of the land rental, harvesting, and transportation currently account for a very large proportion of the production cost of sugarcane, leading to low profits for farmers. Sugarcane was inferior to other crops in crop competition. It has sent both sugarcane farmers and enterprises into a dilemma. Sugarcane failed to promote the advantage of scale, which is increasingly being narrowed in the old "shirt" of crop planning. Therefore, the large-scale sugarcane field is both a premise and a goal to be achieved to develop the raw material area again.

In the conditions that the market has many adverse developments, leading to a serious decline in the sugarcane raw material area, thousands of hectares of sugarcane being converted to other crops, and a shortage of raw sugarcane of factories. This has been affecting negatively the domestic sugar industry. Regarding this issue, according to Dr. Tran Cong Thang, Director of the Institute for Policy and Strategy for Agriculture and Rural Development, the import of raw sugar due to the lack of raw sugarcane is very unstable. In the long term, it is necessary to develop the sugarcane raw material area sustainably.

Increasing application of science and technology to sugarcane

The most important parties that need to be linked together in the sugarcane production chain include farmers, entrepreneurs, scientists, the State, and the representative for the interests of the sugar industry - the Vietnam Sugarcane and Sugar Association. To be able to solve this problem, all parties need to do their duties well, coordinate closely, and form a value chain throughout from farming, production, to distribution to combine strengths, creating the resonance.

Right from the beginning of this year, Decision No.477/QD-BCT imposing temporary anti-dumping and anti-subsidy duties on cane sugar products from Thailand immediately created a new vitality for the domestic sugar industry. The market is protected from unfair competition, and enterprises and farmers are being shared the benefits.

In this panorama, at a macro level, the State plays a very important role in the development of raw material areas by establishing a transparent and tight policy and legal framework to help create a fair competition and development environment for the sugar industry. In the context of global integration, the sugar industry needs the State to participate more in regulation through appropriate policies and decisions based on international laws and practices.

At the intermediate level, enterprises are the bridge between farmers and consumers. When the raw material area declines, cane sugar enterprises are under pressure to both meet market demand and strive to re-develop the raw material area by building large-scale sugarcane fields, supporting farmers in mechanization, along with synchronous scientific and technical measures. From there, farmers take advantage of the scale, increase productivity and commercial cane sugar percentage. Sugar refineries will then have enough raw materials and produce high value-added products to meet market demand.

Farmers play a key role in the production of raw sugarcane but are also the most "vulnerable" factor in the value chain. Therefore, the current ultimate thing is that farmers need to strengthen their internal resources by raising awareness in linking and actively applying scientific and technological advances. The scientist will be the consultant in the process of implementing the stages of linkage so that the establishment of the sugarcane production chain goes smoothly and brings high efficiency.

According to experts, all solutions are still aimed at improving the competitiveness of domestic sugarcane. Particularly, price is an important but not the sole driver. Restructuring, constantly changing, and developing, the sugar industry needs to take advantage of sugarcane to reduce production costs, thereby bringing clear profits to farmers and enterprises, and benefits to consumers.