For many years, whenever enterprises face difficulties in any export market, returning to the domestic market is always an effective and wise choice. In other words, the domestic market with a population of 100 million people is a base, a well-grounded fulcrum for enterprises. For instance, after many years focusing on exporting, An Giang Fisheries Joint Stock Company (Agifish) was sued for dumping its products in the US market in 2002. It caused this company to end in deadlock. Agifish has switched to research the domestic consumer tastes and introduced suitable products to the market to maintain its production. The first 38 products, mainly supplying for domestic consumers, such as basa fish crackers and instant dried basa fish, brought into supermarkets from Can Tho City to HCMC, have been favored by many consumers. The company has become a phenomenon of a successful return to home ground in a flash.

In terms of business development orientation, Saigon Food (SGF) has emerged as one of the successful enterprises when returning to the domestic market. Ms. Le Thi Thanh Lam, Deputy CEO of SGF, said that due to the specific production of frozen seafood products, right from the start, SGF mainly develops products for modern distribution channels because it needs to have tools and conditions for preservation, like freezers. By 2011, the company changed its name from S.G Fisco (former name) to Saigon Food. When changing the word ‘fish’ to ‘food’, the company had determined to expand both products and domestic distribution channels. Previously, because it focused on modern distribution channels, SGF only paid attention to frozen seafood products. Now, it has released more products that can store at room temperature, so they are suitable for grocery and store channels. According to Ms. Lam, the domestic market with more than 5,000 outlets in the traditional distribution channel has become the main selling point, a well-grounded fulcrum for the company.

Recently, Minh Phu Group has chosen to return to the domestic market when the Covid-19 pandemic has heavily affected exporting. From a company specializing in exporting products with a brand name that has conquered consumers in many markets, namely the US, Japan, and the Middle East, Minh Phu has decided to return to the domestic market with several seafood products processed separately to suit the taste of Vietnamese consumers. The representative of Minh Phu said that the company had the advantage of understanding the market and the culture of Vietnamese consumers, so it would have more opportunities to compete with foreign goods. This is an opportunity for Vietnamese products to dominate the market.

Since joining WTO, Vietnam has always been one of the top retail markets with the most potentials for many reasons. Not only attracting foreign investors in the retail sector, but many manufacturers have also rushed to flock to Vietnam, under various forms of direct investment in factories or through mergers and acquisitions (M&A). Domestic manufacturing enterprises have also speeded up research and investment to conquer the domestic market. 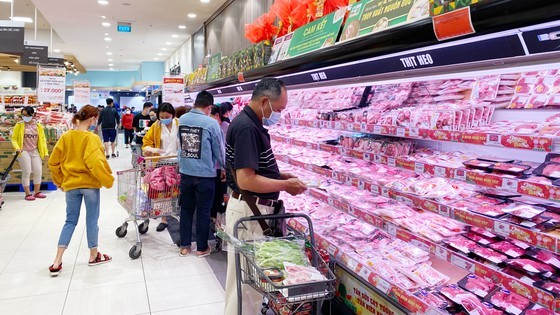 Customers go shopping at Aeon Mall Binh Tan in Ho Chi Minh City. (Photo: SGGP)
According to the World Bank (WB), a developing domestic market can partially supplement or even counterbalance the foreign market. Up to now, nearly one-sixth of Vietnam's population has joined the global middle class with a per capita expenditure of more than US$15 per day. With the current rate, an additional 1 million Vietnamese people will join this group each year. Because of the rapid increase of the middle class and income growth, domestic consumption has become the main motivation for the growth of the retail industry in Vietnam. This core driving force has been maintained in the past months despite the impacts of the Covid-19 pandemic. Not only use products and services more, but domestic consumers also demand a better quality of goods and services.

From the beginning of last year to now, the total retail sales of goods is one of the few macroeconomic indicators to keep steady growth. Last year, total retail sales of consumer goods and service revenue nationwide hit nearly VND5.06 quadrillion, up 2.6 percent year-on-year. Of which, the wholesale and retail sales of goods maintained a fairly high growth rate of 5.53 percent, becoming a crucial driver for domestic market growth and contributing 0.61 percentage points to GDP growth of the country in 2020.

According to experts, the successful prevention of the pandemic in Vietnam is the factor that helps the retail sales of goods and service revenue to recover growth in 2020, reaching 9 percent. According to the calculation by the Ministry of Industry and Trade, if the total retail sales and service revenue increase 9-9.5 percent per year in the period from 2020 to 2025, by 2025, the added-value of the domestic trade will contribute about 13.5 percent to GDP, and the total retail value is estimated at $350 billion in 2025, 1.6 times higher than 2020.

From the perspective of businesses, 2020 was a year full of difficulties and challenges, but it was also an opportunity for enterprises to change their vision and business methods. Mr. Phan Van Dung, Deputy CEO of Vissan, shared that the year 2020 had urged Vissan to focus on robustly exploiting and developing the domestic market. With a population of 100 million people, consumer demand and purchasing power are extremely large. Vissan has constantly launched products suitable to consumer tastes, ensuring nutrition and food safety. Besides 130,000 outlets in the traditional distribution channel, more than 1,000 supermarkets, convenience stores, and a network of more than 50 showrooms nationwide, Vissan has cooperated with e-commerce platforms, such as SENDO and NOW, set up a hotline to help consumers to make orders directly by phones, and put into use a chain of stores on Lomart to diversify the way of selling to best meet the shopping needs of people. As a result, Vissan has still managed to ensure revenue growth.

The fact that enterprises focus more on the domestic market is a good sign. In general, this is the basis to create autonomy for Vietnamese goods right on home ground. Enterprises can control the market, reducing the risk of becoming a 'hollow' in consuming goods from the outside in the process of integration, and opening the market.