Assessing the market in 2021, many enterprises in the agriculture, forestry, fisheries, food, and foodstuff sectors said that difficulties remain, at least until the end of June this year. Therefore, to cope with the above situation, enterprises, on the one hand, maintain the strategy of expanding the domestic market, and on the other hand, increase their export capacity.

Generally analyzing the growth of agriculture, forestry, fisheries, food, and foodstuff processing industry, Mr. Do Thang Hai, Deputy Minister of Industry and Trade, said that the economy of Vietnam, in general, and Ho Chi Minh City, in particular, had experienced several fluctuations, especially in import and export activities. The national agriculture had to face various difficulties when the growth rate showed signs of a slowdown; input costs increased; natural disasters and epidemics occurred in many places, directly affecting agricultural production and food manufacturing and processing enterprises.

Agriculture took part in that general economic picture as an important bright spot, affirming its role as a pillar of the economy in difficult times when its growth reached 2.68 percent, higher than the level of 2.01 percent in 2019. Exports consecutively set new records when the total agro-forestry-fishery export turnover reached US$41.2 billion last year, up 2.5 percent compared to 2019, and the trade surplus of the whole industry hit $10.4 billion, up 6.5 percent.

However, last year, the export turnover of key agricultural products slid slightly, merely touching $18.5 billion, down 0.5 percent compared to the same period in 2019, and seafood exports only reached $8.47 billion, down 0.8 percent. Meanwhile, there were five items with an export turnover of over $3 billion, including shrimp with $3.66 billion, vegetables and fruits with roughly $3.35 billion, cashew nuts with $3.24 billion, and rice with $3.07 billion. These are impressive results for Vietnam's agriculture in 2020. In HCMC alone, despite the low growth rate of about 1.39 percent (the growth rate was 7.83 percent in 2019), but only the food manufacturing and processing industry posted positive growth at 2.2 percent. Especially, the consumption index of processed food products increased by 4.3 percent. The food processing industry has made an important contribution to the development of four key industries, in particular, and the city's industry in general.

Explaining the above fact, Ms. Ly Kim Chi, Chairwoman of the Food and Foodstuff Association of Ho Chi Minh City, said that in the context of the Covid-19 pandemic, food manufacturers have actively transformed their business operations. Enterprises have increased the coverage of goods on traditional distribution channels and implemented the price stabilization policy. It has not only made up for the supply shortage in the market due to supply chain interruption, but also created security among consumers, contributing to stimulating production, and met the needs of the people well. More importantly, it has recouped the revenue losses because of the disruption of export orders. 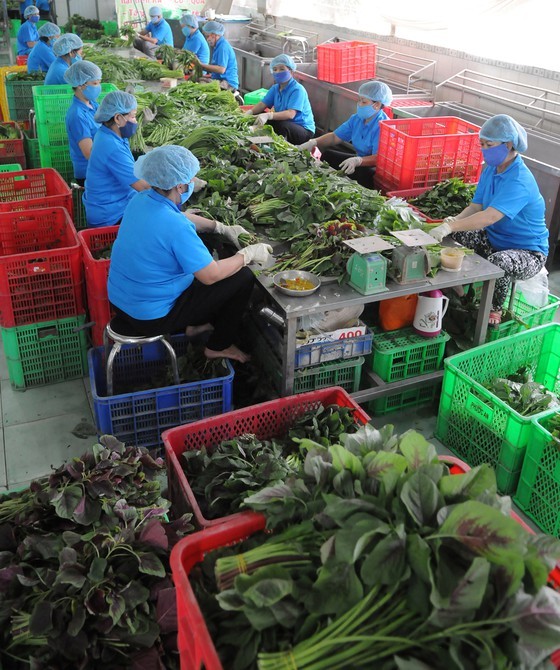 Vegetables processing at Phuoc An Cooperative in Binh Chanh District in Ho Chi Minh City. (Photo: SGGP)
Sharing the same point of view, the representative of Vissan Joint Stock Company said that since the outbreak of the pandemic, the company's sales soared by nearly 100 percent for canned food, 15-20 percent for instant sausages, and above 20 percent for frozen goods. Therefore, to meet the consumer demand of the market, the company had to arrange for its workers to work in three shifts. Its inventory always ensured to meet about 39 percent of consumer demand of HCMC and 61 percent of the country. Noticeably, in the context that the consumer demand for product groups, especially essential goods, escalated, enterprises not only maintained supply to the market but also participated in the price stabilization program. Their actions helped to prevent dishonest enterprises from cornering the market. On the other hand, it has raised the reputation of Vietnamese brands in both domestic and foreign markets.

Creating an open corridor for enterprises

Assessing the market in 2021, many enterprises said that the difficult situation would linger, at least until the end of June this year. To cope with it, enterprises, on the one hand, continue expanding the domestic market, and on the other hand, increase their export capacity. According to Ms. Ly Kim Chi, the US is still the largest export market of Vietnam. The next is China, Europe, the ASEAN, and Japan. In these markets, Vietnam has signed free trade agreements. Besides, agricultural, aquatic, seafood, processed food, and foodstuff products only need to meet technical standards, then they will be able to enter the market smoothly. In terms of cost prices, exported goods from Vietnam will enjoy a preferential tax rate of zero percent, which means that Vietnamese products will have a great competitive edge in these markets.

Meanwhile, in the domestic market, enterprises will suffer the burden caused by massively-imported products. However, this issue is not too serious. The latest survey by Ocean Blue Market Research Company said that up to 76 percent of domestic consumers trust and prioritize using Vietnamese goods because they understand the origin, brand, and quality. This trend has been shaped clearly since last year when the situation of the pandemic developed complicatedly, and Vietnamese products still ensured the supply, as well as the safety for consumers.

The remaining issue is that authorities should continue to focus on administrative reform as much as possible to create an open corridor for enterprises to develop. At the same time, they should restart the program to connect the value chain between manufacturing and trading enterprises in different industries, create a production chain with distributors, and connect provinces and cities to head towards effective regional development. On the other hand, they should provide more services on market research and market information for enterprises, organize many trade promotion and connection programs for enterprises to focus on key export markets or markets with competitive advantages.