The Ministry of Information and Communications reported that digital transformation was promoted strongly and reaped encouraging outcomes in the first half of 2022.

Digital infrastructure has continued to be improved, with fixed and mobile broadband internet speeds respectively reaching 71.79 Mbps and 35.29 Mbps, up 32.7 percent and 4.7 percent year on year.

Besides, 35 national digital platforms have been developed, of which 31 have become operational and four on a trial basis. Ministries and sectors have also coordinated to build 50 other platforms, including 18 serving the formation of a digital government, 16 for a digital economy, and 16 for a digital society.

Breakthroughs have also been recorded in the digital economy, whose added value has made up about 10.41 percent of GDP, according to the ministry.

However, certain difficulties and shortcomings still exist, including the shortages of capable personnel and funding for the task and the lack of monitoring mechanisms. 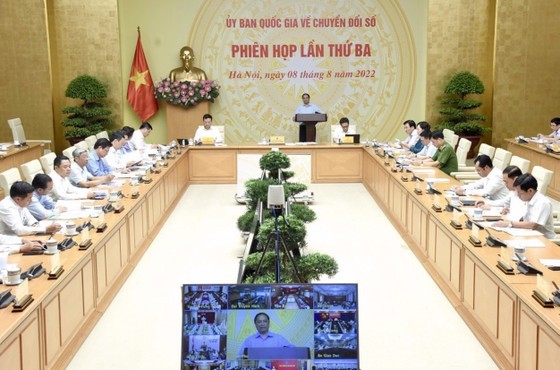 The third meeting of the National Committee on Digital Transformation in Hanoi on August 8. (Photo: SGGP)
PM Chinh, who is also head of the national committee, said digital transformation needs constant reforms, a breakthrough mindset, a strategic vision, proactiveness, and creativity.

He underlined the importance of mobilizing every resource for the work, especially through the public - private partnership, while ensuring harmonious interests among the State, people, and enterprises.

He asked ministers, heads of ministry-level bodies and Government agencies, chairpersons of the provincial-level People’s Committees, and the steering committees for digital transformation of ministries, sectors, and localities to drastically carry out the assigned tasks under the national digital transformation program, the national strategy for developing the digital Government, and the national strategy for developing the digital economy and society to meet the targets for 2022.

The Government leader also gave out duties to each ministry and sector while requesting businesses, particularly those in the information, communications, and science - technology industries, to play an active role in the national digital transformation process.