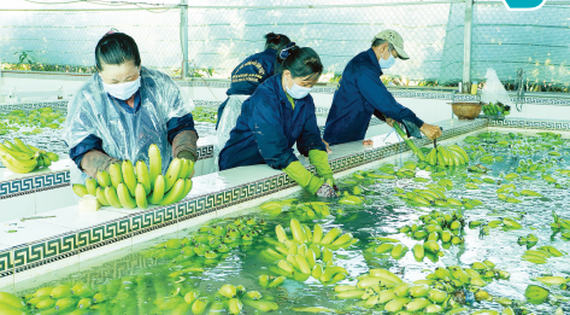 Workers are washing bananas in a fruit exporter in the Mekong Delta region. (Photo: SGGP)
Challenges break the supply chain and transportation
According to the General Statistics Office of Vietnam (GSO), the agriculture sector earned US$1.89 billion from export in June, US$2.07 billion in July but it reduced to US$1.75 billion in August. The export turnover of aquatic products in Vietnam also dropped sharply in August.
General Secretary of Vietnam Association of Seafood Exporters and Producers (VASEP) Truong Dinh Hoe said that only 30-40 percent of aquatic product companies in Southern localities have implemented the model of "three on the spot". The production capacity of these businesses has also declined by 50-60 percent because many workers left their jobs to avoid getting Covid-19, leading to the region’s fall in production capacity by 60-70 percent.
Shrimp export which is one of the strong points of the Mekong Delta region also saw a sharp drop due to the temporary suspension of shrimp processing factories.
The country’s shrimp price has dropped while the global shrimp price is on the rise. Shrimp and catfish processing and exporting enterprises are facing a variety of challenges of Covid-19 prevention rules for trans-provincial travel causing the break in the supply chain and transport of goods to supermarkets, shopping malls and seafood processing plants for exporting, General Director of Minh Phu Seafood Joint Stock Company (Minh Phu Seafood Corp) Le Van Quang said at the recent conference on the consumption and production of agricultural and aquatic products in the last months of 2021.
Besides, many rice milling plants in the Mekong Delta region have also sent words of late shipment apology to their partners due to the break in the supply chain during the ongoing social distancing measures and the lack of empty containers from Asia to deliver goods to customers.
According to the Ministry of Agriculture and Rural Development, the Vietnam's five-percent broken rice price has dropped to US$385-390 per ton, the lowest decrease in the last six months. It is expected to increase by US$403-409 per ton in the beginning week of September.
The US remains Vietnam’s biggest export market, followed by China, the EU, ASEAN, South Korea and Japan. However, these markets have many changes in technical barriers to trade (TBTs) that require Vietnamese enterprises have to actively improve their technologies and production processes to meet the major export markets’ technical regulations and standards, said Deputy Director of the Vietnam Sanitary and Phytosanitary Notification Authority and Enquiry Point (SPS Vietnam Office), Ngo Xuan Nam. 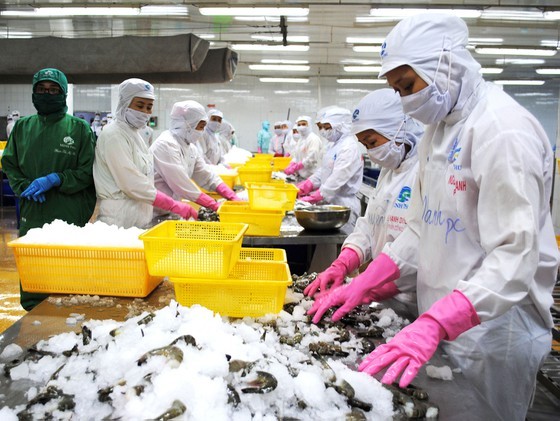 Shrimp export sees a sharp drop due to the temporary suspension of shrimp processing factories.
At the reviewing conference on the activities of the Special Mission Team 970 that was set up to deal with issues related to the consumption of agricultural products amid the Covid-19 pandemic by the Ministry of Agriculture and Rural Development, enterprises suggested the Ministry to solve difficulties in harvesting, supplying raw materials and and consumption.
Some 38,500 tons of catfish have been yet harvested while 90 percent of processing plants have to temporarily suspend because that have failed to implement the model of "three on the spot". Many localities give vaccine priority to workers working in processing plants but fish farmers. These breeders have not been granted travel document, said Deputy Director of the Department of Agriculture and Rural Development of Can Tho City, Nguyen Tan Nhon.
Deputy Minister of Agriculture and Rural Development, Head of the Special Mission Team 970 Tran Thanh Nam noted that the team will release a document on establishing catfish harvesting teams in six provinces in the region, and ask the local departments of Health, Industry and Trade to issue mechanisms to allow the teams to harvest agricultural products under strict safety guidelines.
As planned, a virtual conference on promoting consumption of agricultural products amid the Covid-19 pandemic chaired by Deputy Prime Minister Le Van Thanh will be held on September 11.
The Ministry of Agriculture and Rural Development will propose the Government to issue a directive on resumption of agricultural production nationwide.
On the other hand, businesses and the local functional departments of localities have made every effort to solve problems in promotion and consumption of agricultural products.
The Department of Agriculture and Rural Development of Dong Nai Province has established two industrial zones specialized in Agro-product processing, including Phu Tuc and Long Giao, and launched solutions to expand export markets, such as the EU, the US, Japan and the Middle East.
Meanwhile Ca Mau Province has used the internet and forms of digital communication to strengthen trade promotion activities, said Deputy Director of provincial Department of Industry and Trade, Duong Vu Nam.
Regarding to the pepper manufacturing sector, Counselor at the Vietnam Trade Affairs Office in India, Bui Trung Thuong said that Vietnam’s pepper export turnover to India reaches about US$30 million a year. He noted that Vietnamese exporters should coordinate with famers and cooperatives to meet food safety regulations and enhance the quality of Vietnamese pepper.