After keeping delaying for many years, from the beginning of this year to now, many small banks have also successfully registered to trade on the UPCoM - the stock exchange for companies unlisted on the official markets of Ho Chi Minh Stock Exchange (HoSE) and the Hanoi Stock Exchange (HNX). As the stock market is favorable, banking stocks have increased well after being listed on the trading floor.

The leader of NamA Bank said that it was preparing procedures to transfer shares to the HoSE after it had finished increasing charter capital and closing the foreign room with its strategic partners. Next, on October 15, the stock code SGB of Saigon Joint Stock Bank for Industry and Trade - Saigon Bank was also officially traded on the UPCoM with a surprising listing price at VND25,800 per share. However, so far, this stock is hovering at VND13,000 per share. It is the only bank whose share price has decreased over the past time.

Not only have hurriedly listed on the stock exchanges, but some banks also changed the stock exchange to increase liquidity, and at the same time, improve their position and reputation. Specifically, LienVietPostBank, with the stock code LPB, is the first bank to move its listing to the HoSE in 2020 successfully. More than 976 million LPB shares have begun to move from the UPCoM to the HoSE from November 9 with a reference price of VND11,800 per share. About one and a half months after the shift, the share price of LPB has gained by more than 10 percent. 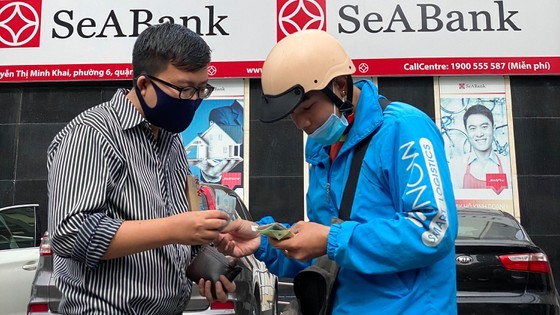 SeABank will be listed on the HoSE soon. (Photo: SGGP)
Similarly, on November 10, nearly 925 million shares of Vietnam International Commercial Joint Stock Bank (VIB) officially changed from the UPCoM to the HoSE at VND32,300 per share and have now advanced to VND33,200 per share. Not only moved from the UPCoM to the official trading floor, but more than 2.16 billion ACB shares were also officially transferred from the HNX to the HoSE on December 9, with the opening price of the first trading session of VND26,400 per share. At present, ACB's share price is standing at VND28,400 per share.

The boost generated from the stock exchange switching not only helps banks to improve their ability to mobilize capital, but also is an opportunity for them to find investors with strong potentials, and attract foreign capital to meet development requirements in the future. Specifically, after raising capital and switching to the HoSE, ACB shares are expected to enter the index baskets, such as the VN30, VNDIAMOND, VNFINSELECT, and VNFINLEAD, after having enough listing time here.

According to Decision 242/2019 of the Prime Minister on the scheme of restructuring the stock market and insurance market to 2020 and orientations to 2025, by the end of 2020, all commercial banks must list shares on the stock exchange or register for trading on the UPCoM.
Getting into these index baskets can significantly improve the liquidity of stocks, as well as the capability to lure foreign capital of banks. Similarly, with the plan to switch to the HoSE from the HNX of SHB Bank, securities companies also forecast the upcoming portfolio restructuring period of the MVIS Vietnam Index - the modified market-cap-weighted index tracks the performance of the largest and most liquid companies in Vietnam. SHB will be the only stock being added, with the proportion estimated at 4 percent, equivalent to 23 million SHB shares. The fact also shows that the effect of listing and switching trading floor has had a positive impact on the prices of banking shares recently. The stocks that have changed the trading floor, such as ACB, VIB, LPB, and SHB, are all among the top five banking stocks, with the strongest increases of the year.

Besides these three banks, other banks that will also be listed on the HoSE shortly are SHB, SeABank, OCB, and MSB.

Currently, Vietnam's stock market is extremely positive, with market liquidity maintaining at high levels and continuing to set new records. There were some recent trading sessions in which market liquidity soared to over VND15 trillion per session. The banking sector is still the industry that attracts the most cash flow, with the total trading value per session accounting for 25 percent of the total market value, playing a leading role, directly affecting the general tendency.

The VN-Index has increased by more than 11 percent since the beginning of this year, and one of the main driving forces of the market belongs to banking stocks. In fact, despite several negative impacts from the Covid-19 pandemic, in general, the business results of banks are still quite positive. According to the financial statements of 26 listed commercial banks, the total profits after the first three quarters of this year of banks still reached VND76.27 trillion, up 11.5 percent over the same period last year.

Besides, the bright prospects when the economy is showing signs of recovery after the country has basically controlled the Covid-19 pandemic domestically will be a factor for investors to increase their expectations for banking stocks. In the recently published report on Vietnamese banks, JP Morgan also states that Vietnamese banks will still have high growth in 2020, at the same time, it expects that the asset quality of Vietnamese banks will remain stable in the next two years.


In the trading session on December 22, the cash flow continued to pour into the market. At 3 p.m., market liquidity exceeded VND17.5 trillion. Of which, on the HoSE alone, the matched volume officially surpassed the peak with 696 million shares per trading session, equivalent to a value of more than VND14.59 trillion, leading to an overload in the HoSE system. The HoSE actively cut all orders placed on the trading floor to avoid overloading the whole system.

In the session on December 22, the VN-Index continued to climb to 1,083.45 points. Market liquidity jumped strongly with 964.6 million shares, worth more than VND17.5 trillion. Of which, put-through transactions accounted for more than VND2.52 trillion.