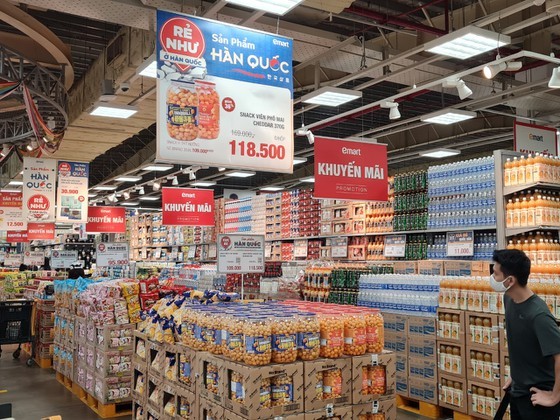 HCMC will also hold a Promotion Fair 2021 from December 21 to 26 at Phu Tho Sports Stadium in District 11 with more than 450 booths. (Photo: SGGP)
Speaking at a conference last week, Phan Thi Thang, Vice Chairwoman of the municipal People’s Committee, said that although the city has basically contained the largest outbreak, the situation remains unpredictable.

Businesses should speed up production to ensure supply, restore disrupted supply chains with other provinces, and offer various purchasing methods and shopping experiences, according to Thang.

Traditional markets and wholesale markets should reopen to ensure supply by the end of the year. The transport of goods from the city to provinces has been affected by provinces’ restrictive measures on coronavirus outbreaks.

The disruption has also been caused by store chains shutting down after employees tested positive for Covid-19, according to Thang.

“Wholesale markets and traditional markets, supermarkets, and convenience stores had to stop operation during that time," she said.

“We have prepared scenarios for the year-end market because the situation remains unpredictable,” he said, adding that the company has diversified its supply sources.

The current food security problem is not only about rice but meat, fish, and fruits and vegetables. He said the city should consider building more cold storage systems large enough to store goods in case of a future outbreak.

From now to the end of 2021, the city will be organizing promotion programs.

The city has asked distributors and manufacturing enterprises to jointly launch promotional programs with priority given to online channels with non-cash payments.

The city will organize a conference to connect goods supply between the city and other provinces from December 2 to 5.

It will also hold a Promotion Fair 2021 from December 21 to 26 at Phu Tho Sports Stadium in District 11 with more than 450 booths, including consumer goods, farm produce, and handicrafts (with promotions of up to 100 percent).

The promotions include discounts, gifts, and lucky draws. Participating businesses must ensure the origin and quality of the products.

The Ministry of Industry and Trade will organize a month-long program called “National Focused Promotion Month” in December. Participating businesses are asked to strictly comply with pandemic prevention regulations in line with the Ministry of Health regulations.