On June 2, various kinds of merchandise especially for the Dragon Boat Festival the next day witnessed an expected price rise of 5-20 percent. Zongzi, for instance, is sold at VND95,000-125,000 (US$4-5.4) per ten items with filling or VND60,000-75,000 ($2.6-3.2) per ten without filling. Even though the purchasing power is going up this year, the material costs are on the rise as well, so there is not much profit, said one zongzi seller on Pham Van Hai Street of Tan Binh District.

Van Hung, owner of A.H. Food Store on Duong Thi Muoi Street in District 12 shared that this year, more customers put order for fresh fruits and traditional Dragon Boat Festival food, many of whom use the online channel. 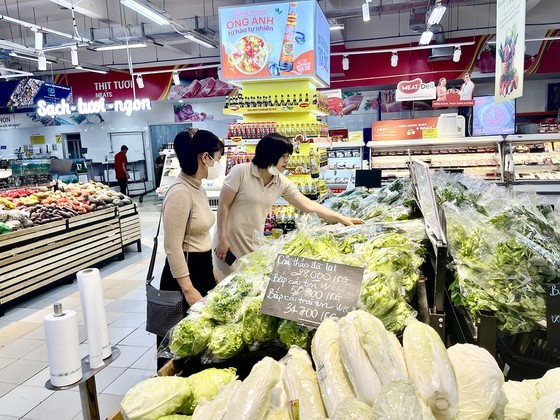 People are selecting food for their meals in WinMart.

In general, at present, most consumer goods manufacturers admit they are facing tough challenges due to the continuous fuel price rise but promise to apply the most reasonable prices for their products, while running promotion campaigns.

Co.opmart and Co.opXtra are displaying nearly 1,000 tonnes of lychee from Hai Duong Province along with an increase of 30-40 percent of other fruits like orange, grapefruit, rambutan, grapes to serve customers during the Dragon Boat Festival. Other supermarkets such as MM Mega Market, Go!, Satramart are saving a lot of space for Dragon Boat Festival food.

Sunfood Dalat Co.op, one of the main vegetable suppliers to Winmart in HCMC affirmed that it is trying to sell produce at the most reasonable price possible. It has mostly maintained stable prices for its goods to lessen the financial burden for its clients.

In the two major produce wholesale markets of Thu Duc and Hoc Mon, there are sufficient merchandise to satisfy the demands of city dwellers at an attractive price. Compared to a sudden price increase a few days ago, the prices of produce like mushroom and fresh vegetables saw a reduction yesterday, so the retailed ones are acceptable now. For example, grapefruit and mushroom are sold at VND30,000 ($1.3) and VND55,000 ($2.4) per kilo, a drop of VND15,000 ($0.65) compared to May 30.