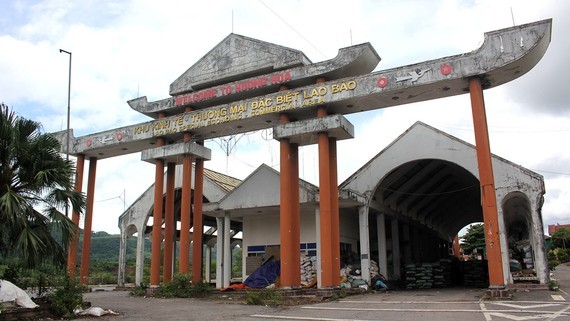 Lao Bao Special Economic and Trading Zone has a surface area of 15,804ha, spreading through 5 communes and 2 towns along National Way No.9 in Quang Tri Province. It is considered a general economic model and a "special non-tariff zone". On its golden time between 2010-2012, the import-export turnover of this economic zone accounted for about 50% of the total one from 10 provinces along Vietnam-Laos border.

A visit to Lao Bao Special Economic and Trading Zone in the middle of this September, however, revealed a series of abandoned offices and project headquarters. It is absolutely opposite to the scene only 10 years ago. Inside the most anticipated zone, over 50 percent of businesses have already closed down, while other projects are carried out at slow speed.

Thien Nien Ky Supermarket, for instance, opened in 2009 with a total investment of hundreds of billions of VND. After 5 years, it was shut down, and the land was retrieved to transform into a general inspection station of Lao Bao Border Gate. Moving to Lao Bao Commercial Center, the heart of Lao Bao Special Economic and Trading Zone, commercial activities are also extremely low.

Facing profit loss for a long time, many individual traders decided to close their booths here and transfer their businesses to Laos. The situation is not at all brighter for large companies and wholesalers, who are witnessing downgraded trading facilities. A series of construction projects like Hao Quang Center, Duy Phat, Rong A Chau Center can never be completed.

Truong Khac Nghi, Deputy Head of the Management Board of Quang Tri Province Economic Zone informed that from 2016-2020, the revenues of investment projects in this Economic Zone were only VND5.4 trillion (US$226 million) to contribute VND460 billion ($19.3 million) to the national budget. The corresponding figures for last year were VND1.3 trillion ($54.4 million) and VND83.2 billion ($3.5 million).

More seriously, there were several cases of businesses transporting merchandise from all places in the country here. These goods were then mostly distributed back illegally to different domestic sellers while another part was also illegally carried to Laos via unofficial quota. This has severely damaged the market and created value added tax loss.

Another issue that has prevented Lao Bao Special Economic and Trading Zone from long-term blooming even when it is sited on the main East-West economic route is its traffic infrastructure has not been fully completed. This has created frequent traffic congestion, some of which are rather serious, as well as land slide due to heavy rain.

In addition, Lao Bao Customs Office stated that this economic zone is located in a mountainous area, leading to various challenges in infrastructure planning and investment. Many laborers here have low educational levels with no proper training for professional work.

Also, since 2014, when the Import-Export Law No. 107/2016/QH13 came into effect, this zone has enjoyed no more preferential rates as other ‘special non-tariff zones’, and thus discouraging many investors as well as businesses. This is the major disadvantage leading to the troublesome investment status at present.

Facing a similar situation is Cau Treo Border-gate Economic Zone in Huong Khe District of Ha Tinh Province. It was created in 2007 on a surface area of nearly 57,000ha. After 15 years enjoying preferential conditions being a ‘special non-tariff zone’, it is now no longer an attractive destination for investors and businesses. All that are left after these entities moved away are incomplete buildings.

Dai Kim Industrial Park is an example of that case. Its land is left wasteful, and the unfinished buildings are seriously degraded. National Way No.8A, the main route to Cau Treo Border Gate is severely damaged with no plan of repair.

Deputy Head Nghi stated that for Lao Bao Special Economic and Trading Zone to return back to its golden days, it is necessary to turn it into a new development driving force of Quang Tri Province so that this province can become a bright light on the East-West economic route and an important bridge between the Central region and Laos, Thailand, as well as the development triangle Vietnam – Laos – Cambodia.

It is also essential to upgrade traffic facilities and infrastructure, boost cooperation and goods exchange between Quang Tri Province of Vietnam and Savannakhet of Laos, complete the project to establish a cross-border economic and trading zone between Lao Bao and Densavan of Laos, and accelerate the construction of Cam Lo – Lao Bao Expressway, Route No.15D to ease the traffic burden on degraded National Way No.9.

At the end of 2020, the Prime Minister approved the inclusion of Lao Bao Special Economic and Trading Zone and Cau Treo Border-gate Economic Zone in the list of 8 key border-gate economic zones, receiving investment directly from the state budget from 2021-2025. It is hoped that this new investment policy can aid the two zones to be bustling again and become the foundation for trading activities in the Central region.