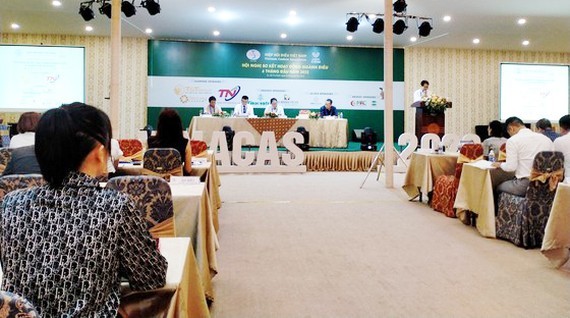 At the meeting
According to general statistics from the General Department of Vietnam Customs, in the first five months of 2022, approximately 206,110 tons of cashew kernels of all kinds were exported earning over US$1.19 billion in export turnover, down 7.81 percent in volume and 6.81 percent in value. However, the average export price was about $5,792 a ton, up 1.45 percent from the same period last year.
Regarding imports in the first five months, enterprises imported about 968,000 tons of raw cashew nuts from abroad with a value of nearly $1.4 billion, down 35.24 percent in volume and down 37.84 percent in value over the same period in 2021. However, prices of imports from Africa increased by 15 percent-20 percent since the beginning of the season.
More importantly, importers are tending to be slow to purchase raw materials due to many reasons but the most common is the price difference between imported raw cashew nuts and export kernel prices.
The price of raw cashew nuts is at a very high level compared to the price of kernels being sold, the cost of processing and exporting is high while the price of kernels is low. Processing plants hardly earn a profit.
Furthermore, Russia ranked 11th out of 104 export markets of Vietnamese cashew kernels in 2021 accounting for 1.63 percent of the country’s market share with an export value of $61.8 million out of the total of $3.6 billion in exports of Vietnam cashew nuts.
Because Russian banks have been excluded from the international payments messaging system SWIFT system, the export of Vietnamese cashew nuts to Russia has difficulty in payment, greatly affecting cashew exports to this market meanwhile China, the other major market of Vietnam's cashew nuts still maintains the stringent ‘Zero Covid’ policy, which continues to have a certain adverse effect on foreign trade and the export of cashew kernels.
According to Vinacas, the country’s export in 2022 will continue to face difficulties with high freight rates compared to previous years. The export kernel price did not increase synchronously with the increase of raw cashew nuts, the factories could not balance the processing cost and export price.
According to the plan set out by the Ministry of Agriculture and Rural Development for Vietnam's cashew industry, in 2022, the cashew industry aims to export $3.8 billion, an increase of $200 million compared to 2021. However, Vinacas suggested reducing export sales in 2022 to about $3.2 billion, down $400 million compared to 2021.