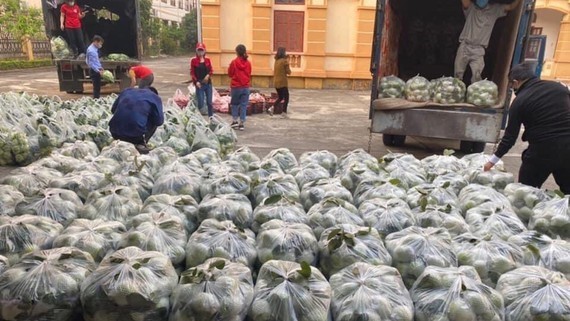 Guavas from Thanh Ha rural district being loaded for sale by Hainoian volunteers
A whopping 15 tons of fresh produce from Hai Duong were sold on February 21 alone at makeshift vegetables stalls at 38 Giai Phong Street in Hanoi, which received 30 tons more the following day.

The produce and transporting vehicles were disinfected at least thrice - at the source, when going through quarantine posts in Hai Duong, and before entering the capital city.
According to the Deputy Director of the Domestic Market Department under the Ministry of Industry and Trade Le Viet Nga, some major domestic distributors have reached out to Hai Duong authorities with offers to help distribute slow-selling products.
Meanwhile, the Hanoi Department of Industry and Trade transported and distributed 300 tons of agricultural produce from Hai Duong and Quang Ninh province over the course of last week.
Hai Duong Province during the Lunar New Year holiday locked down multiple localities for 14 to 21 days, including the major Hai Duong Province, making regular citizens as well as retail distributors refrain from entering these regions.