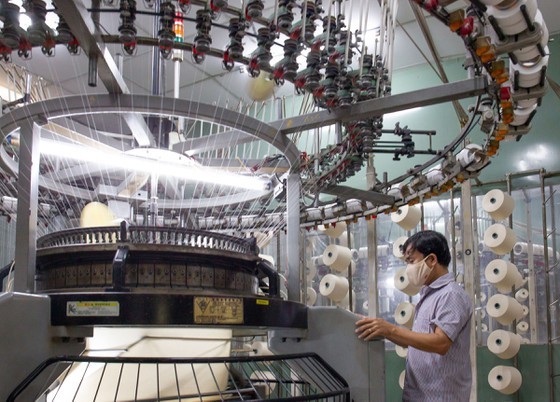 At enterprises, the galloping increase of gasoline prices has forced manufacturers to raise their product costs. Mr. Nguyen Hoang Ngan, CEO of Binh Minh Plastics Joint Stock Company, said that the volume of raw materials that the company had accumulated since the end of last year to serve production in the first quarter was used up, and it had to import new raw materials for production in the second quarter.

Sharing the same points of view, Mr. Vu Nam Chien, Deputy Director of Tan Nhat Huong Co., Ltd., shared that his company can no longer cut other costs to control the rising momentum of its selling prices in the second quarter. The price of raw materials for this second quarter has surged by about 10 percent, so his company is forced to elevate product prices.

Besides the pressure caused by the petrol price hikes, enterprises are concerned about external problems. For instance, many export markets continue to impose anti-dumping duties on Vietnam's export products, making the competitiveness of enterprises, which is already weak in the capital market, worse.

For example, in the main export market of the US, the US Department of Commerce has just imposed an anti-dumping tax of up to 76 percent on Vietnamese plastic bags. Earlier, Malaysia launched an anti-dumping investigation on Vietnamese plastic. The Philippines even has applied safeguard measures against plastic bead products imported from Vietnam.

Garment and textile enterprises informed that the continued instability of the economy had forced many chains of the textile, garment, and leather footwear stores of world-famous brands, such as Uniqlo, H&M, Zara, and Mango, to stop operations or close retail chains in many major markets. This fact has reduced orders of domestic enterprises, causing difficulties for production recovery plans.

Reviewing to cut taxes and fees

In the context of such multi-dimensional difficulties, enterprises said that there are many expenses that authorities should review and cut or extend the implementation time to support them to improve internal resources. For gasoline price, the good sign is that the ministries have submitted an environmental protection tax cut of VND2,000 per liter of gasoline and waited for the Government to submit it to the National Assembly for approval. However, the price is still extremely high and needs to be reduced further. 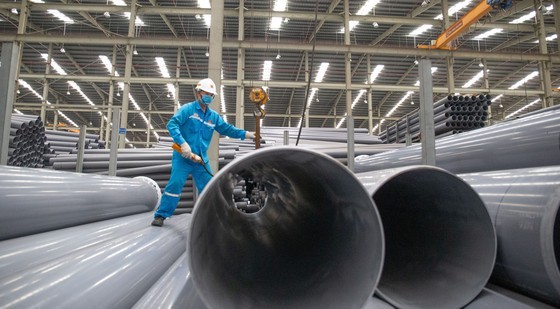 Volatile raw material prices affect manufacturing enterprises, including the steel industry. (Photo: SGGP)
After that, 15 associations jointly proposed that the Government should abolish or delay the application of financial contributions for packaging, products of commercial value, and environmentally friendly materials, and reduce the contribution to recycled plastics produced in Vietnam.

Lately, seven associations have asked Ho Chi Minh City and the Government to suspend the collection of fees for the use of infrastructure and public utilities in border gates and seaports in HCMC. If the fee collection is applied, it will create the following irrationalities: The application time is not appropriate. The unfair fee level will create more burdens and increase the time to carry out administrative procedures, leading to overlapped fees.

Ms. Huynh Thi My, General Secretary of the Vietnam Plastics Association, suggested that HCMC consider not implementing the application of seaport infrastructure fees until the end of December 31, 2022, to create favorable conditions for businesses to reduce costs and restore production and business activities. In addition, the city also needs to reduce new fees so as not to create an additional burden on businesses.

Mr. Dinh The Hien, Director of the Institute of Information and Business Research in HCMC, analyzed that to support people, as well as businesses, authorities need to review fees and taxes to see if they can reduce or temporarily stop collecting taxes and fees to help businesses cool down the prices of goods in the market, and will collect more when the economy is more stable. At the same time, supportive policies from the authorities must be put into practice quickly.

From the beginning of 2022 to now, enterprises have just started to restore production but have faced many shocks, such as rising gasoline prices, rising sea freight rates, and high raw material prices. At this moment, the Government needs to make a decision to ease pressure on people, revive enterprises to maintain revenue, and create momentum for the economy to develop stably.