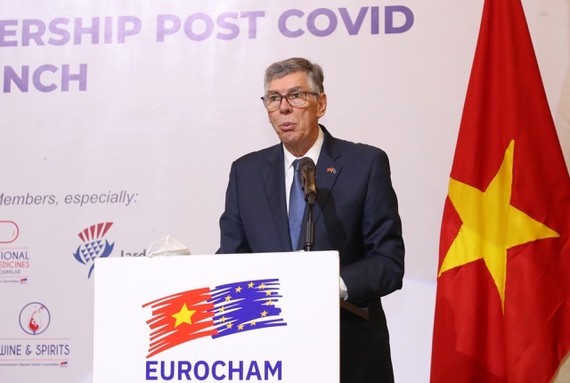 EuroCham President Alain Cany
In comparison to the first quarter of 2022, European investors' confidence in Vietnam's growth potential has decreased. Approximately 60 percent of respondents predict that Vietnam's economy will stabilize or improve in the third quarter of 2022, while this figure was 69 percent the previous quarter.
Around 45 percent of survey respondents said they were very satisfied or satisfied with Vietnam's efforts to attract and retain foreign direct investment (FDI), while 76 percent expect their company to raise capital. FDI into Vietnam before the end of the third quarter.
However, regarding Vietnam's green growth prospects, 79 percent of business leaders said their assessment of Vietnam's green development potential has improved. Nearly 90 percent of respondents think that Vietnam should strengthen the development of the green sector to attract more foreign investment.
The survey also identified barriers to European investment in Vietnam and trade between the two sides. About 35 percent of respondents thought that reducing and simplifying administrative procedures is the most effective way to increase FDI, while 24 percent think that infrastructure development will be the key factor.
Likewise, 45 percent of survey respondents said that the main difficulties that foreign companies face are related to administrative procedures, which hinder their ability to take advantage of the EU-Vietnam Free Trade Agreement (EVFTA).
Commenting on the BCI results for the second quarter of 2022, EuroCham President Alain Cany said that though European business leaders’ confidence slightly decline, influencing factors were mostly out of reach of the Vietnamese Government but mainly due to global economic instability. Not only had the Southeast Asian country experienced this but other countries as well.