Starting the innovation process with the determination to integrate internationally 35 years ago, Vietnam was still a country with backward and closed production. It had consistently implemented reforms, transforming from a centrally planned, subsidized economy to a multi-sectoral commodity economy, which operates under the market mechanism and the State's management and towards socialism. From 1986 to 2000, on average, the gross domestic product (GDP) grew by 6.51 percent annually. The agriculture, forestry, and fishery sector edged up 3.72 percent; the industry and construction sector rose 9.06 percent; the service sector climbed 6.66 percent.

The economic structure had gradually shifted towards promoting industrialization and modernization. The agricultural sector had absolutely solved the food problem, ensuring national food security, changing Vietnam from a country with a lack of food to become the second-largest rice exporter in the world. The total production of cereals reached 34.5 million tons in 2000, 2.1 times higher than that in 1986. Especially, rice exports were more than 3.47 million tons, 26 times higher. Industrial production, on average, jumped 11.09 percent per year from 1986 to 2000. Electricity output in 2000 was 4.7 times higher than that in 1986. Cement production was 8.7 times higher. Rolled steel output was 25.6 times higher. Crude oil production went up from 41,000 tons in 1986 to 16.3 million tons in 2000.

Meanwhile, the hyperinflation had been initially curbed and repelled. Retail prices for consumer goods and services, from a triple-digit annual increase from 1986 to 1988, to a double-digit from 1989 to 1992, fell to only a single-digit during the period from 1993 to 2000. For instance, compared to December of the previous year, the consumer price index rocketed by 349.4 percent in 1988, increased by 17.5 percent in 1992, and even decreased by 0.6 percent in 2000.

Since 2008, Vietnam has also moved out of underdeveloped countries and territories to join lower-middle-income countries. According to the latest data from the General Statistical Office of Vietnam, in 2020, the economic scale of Vietnam reached about US$343 billion, and GDP per capita was $3,521, dozens of times higher than those in 1990. More importantly, the quality of economic growth has gradually shifted to depth. Labor productivity in the 2016-2019 period of the whole economy hiked by 5.86 percent per year, higher than the rate of 4.35 percent per year of the 2011-2015 period. 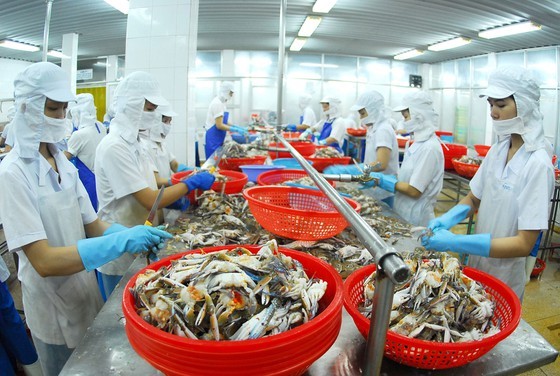 Seafood processing at a company in Ho Chi Minh City. (Photo: SGGP)
Noticeably, thanks to comprehensive and extensive activities of external economic development, the total foreign trade turnover of goods implemented in the 2011-2019 period hit $3.1 trillion, 20.2 times more than that in the 1991-2000 period and 3.6 times higher than the 2001-2010 period. This is a sign showing that Vietnam has exploited the strength of the domestic economy and taken advantage of the global market. It is proved by the fact that foreign investment has become an important capital mobilization channel for socio-economic development, contributing to promoting economic restructuring towards industrialization and modernization, creating more jobs, and improving management capacity and technological level. Especially, foreign direct investment has also stimulated the expansion of external economic relations between Vietnam and other countries in the region and the world.

The new position and growth motivations

Along with the achievements in socio-economic development, the position of Vietnam in the world and the ASEAN has changed significantly. In 2019, Vietnam ranked eighth in the world and second in the ASEAN in terms of GDP growth rate. It was one of the 30 countries with high import and export growth and the 22nd largest export economy globally. Vietnam surpassed other countries in Southeast Asia in foreign direct investment attraction, ranking 25th globally. The Global Competitiveness Index (GCI) of Vietnam in 2019 gained ten notches compared to the previous year, taking the 67th place out of 141 countries and territories. Up to now, Vietnam has established foreign relations with 189 countries around the world. International affairs have been increasingly expanded and clearly affirmed the skill, spirit, and characteristics of Vietnam as a responsible member of the international community, contributing more and more to peace, cooperation, and development not only in the ASEAN region but also in the globe.

New growth motivations have been built. The private economy has developed robustly, with the number of newly-established enterprises increasing rapidly in both the volume and the value of registered capital. Besides, the wave of creative startups has spread widely with many unique business models. The workforce that is skillful, well-trained, and capable of applying high technology to production and business, is focused on developing, creating potentials for modern economic development based on science and technology platform. The national infrastructure system has been built synchronously and modernly, especially large transport and urban infrastructure.

In the early 21st century, the international economic, political, and social context has had many rapid and unpredictable changes. A rigid and stereotypical solution system will be unlikely to achieve the desired effect. In the process of self-verification of policies and life, and the comparison between theory and practice, the Party and the State have been drawing profound lessons for the management of macro policies to proactively and steadily enter a new decade, a new stage of development.