The project has its investment of US$250 million with a designed scale of processing up to 100 million chickens per year. This is the first self-contained chicken processing project in Vietnam with the largest scale in the Southeast Asia which complies completely with traceability procedure throughout the entire supply chain from raw materials for food production to processed products, meeting all the strict criteria from importing countries. 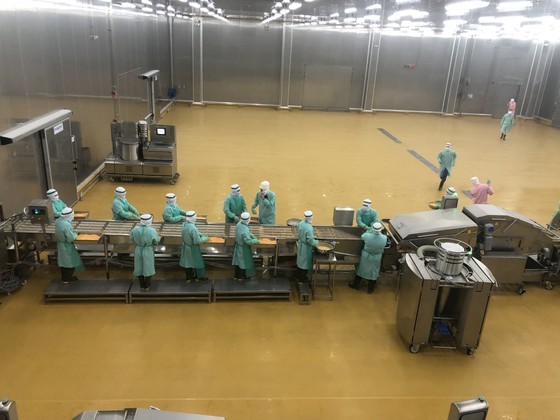 The factory complies completely with traceability procedure
The project includes one feed factory, five brood chicken farms, one hatchery factory, 24 broiler farms and one slaughter-processing factory.
The project is divided into two phases, of which the first phase of 2019-2023 has been implemented in six localities in Binh Phuoc province including Dong Xoai City, Binh Long Town, Dong Phu District, Chon Thanh District, Hon Quan District, Bu Dang District with the scale of processing 50 million chickens per year, meanwhile the second phase will increase capacity of processing up to 100 million chickens per year.
In addition, the plant also takes advantage of technology application including artificial intelligence (AI), big data (Big Data) in management, operation, and breeding and production.

With its modernizing operation, the chicken processing factory is expected to provide high-quality, safe chicken products for not only domestic consumers but also international ones in Japan, Europe, Asia and the Middle East.