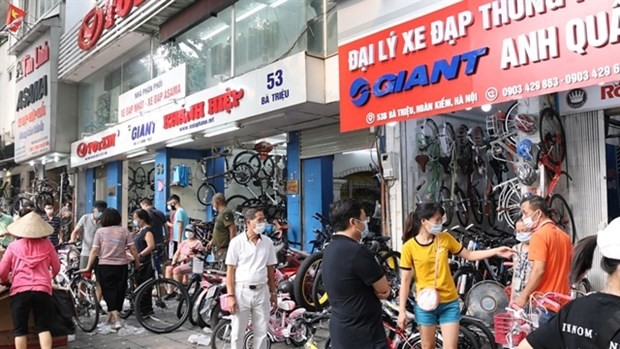 Many customers rush to bike shops on Ba Trieu street in Hanoi to buy bikes for physical exercise (Photo: VNA)

But as time moved on, so too did travel habits, and push bikes were quickly overtaken by motorcycles on Hanoi’s roads.
Now it seems cycles are making a comeback, thanks mainly to the COVID-19 pandemic.
With the closure of gymnasiums due to increased social distancing regulations, many keep-fitters are swapping their gym gear for cycling shorts.
Bicycle shops say they have noticed a sharp increase in new business as more and more people are hitting the road to stay in shape.
“My shop is selling locally-made and imported bikes from prestige foreign companies,” said Van Duc, who own Anh Quan bike shop on Ba Trieu street.
“These days, my shop sells between 20-25 bikes per day, up between 15-20 percent compared to before the pandemic.”
Ha Thu, another shop owner on the same street, agreed.
She said: “The pandemic has caused economic difficulties, so many people change their thinking and buy bicycles to minimise daily costs such as gas, parking fees and to exercise.
“Since May, my shop is selling twice as many bikes as usual at around 30 bikes a day."
Pham Duy, a bike shop owner in Dan Phuong district of Hanoi believes people are also concerned about travelling on public transport because of overcrowding.
"COVID-19 has changed many people's habits,” Duy said.
“All the gyms and yoga studios have closed and travel restrictions have made many people bored as they want to go outside for physical exercise.
“During the pandemic, riding bikes provided one of the easiest ways to get outside and get exercise while also practising social distancing."
Customer Minh Luu from Xuan Dinh district added: “I came here to buy a bike for my daughter to help her get ready for the next school year. Due to the pandemic, I want her to exercise more, so I bought this bike for her to exercise in the morning also.”
Teacher Nguyen Mạnh Anh from Cau Giay district ditched his motorbike a year ago and began to cycle instead. Now his whole family has followed suit.
“All the gyms, sport centres and parks were closed due to the pandemic,” he said. “I paid VNĐ5 million for the bike to ride to work and do physical exercise.
“My wife and son also bought one each to use at the weekends for health benefits."
Computer engineer Thanh Nam opted to rent a bike instead of buying one.
He said: “I often ride around Ho Tay (West Lake) in the afternoon as there is fresh air there and the gym I often go to is now closed because of the pandemic.
“There are many bikes for rent around the West Lake and the price was very cheap, it costs around 40,000 VND (1.7 USD) to rent a bike for three hours, and usually it doesn’t cost extra money for extra time.”
Trung Phong sales director of State-run Thong Nhat Bicycle Company said the impact of the pandemic has helped the bicycle market in recent months.
He said the domestic bicycle market share was estimated to reach between 2-3 million units per year.
Bikes made by Thong Nhat company accounted for about 10 percent of the local market share with around 200,000-300,000 units per year.
Since the beginning of this year, his company has sold more than 100,000 bikes, marking an increase of about 1.5 times compared to the same period last year. The company now has nearly 400 bike shops and sales agents nationwide.
A representative of AEON Vietnam said that this year they have seen a dramatic increase in bicycle sales with a growth rate of between 200 and 300 per cent compared to last year and they predict it will continue to rise for the rest of the year.
According to bike dealers, although there has been a sharp increase this year, there had been a steady sales growth pre-pandemic with people opting for 'greener' travel alternatives.
But many feel the domestic market is still lacking the presence of professional retail chains and the majority of bike shops are managed by smaller, independent traders.
The long-term future is bright, and as the economy develops, more and more people will take to cycling to improve health and living conditions.
Industry insiders also feel with an increase in construction of residential areas and urbanisation, plans are in place to install designated cycle lanes which will give cyclists more confidence to ride safely.
Traffic congestion will be gradually solved as more people will move away from using motorbikes or cars and users will shift from private vehicle use to public transport, waking and cycling.
The bicycle sharing service and bike industry will also be developed and soon become an optimal choice for users who want to bike for short distances.