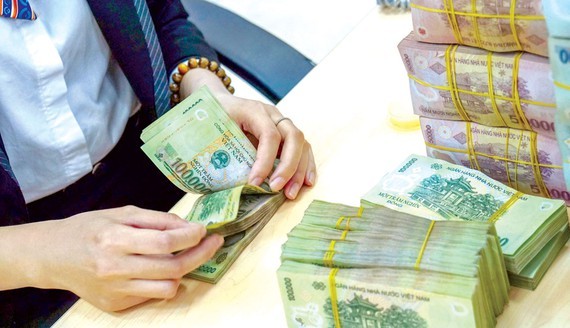 Illustrative photo. (Source: SGGP)
However, because of competition, capital mobilization by commercial banks was not satisfactory enough, which made banks seek mobilization from alternate sources to increase their liquidity.
Slow capital increase
According to Vietcombank, in the first six months of 2021, the credit balance had reached around VND 920,000 bn, up by 9.8% compared to the end of 2020. Meanwhile, capital mobilization in Market 1 reached around VND 1,000,000 bn, an increase of only 1.8% compared to 2020. At VietinBank, the growth rate of outstanding loans in the first six months of 2021 improved significantly compared to the same period in 2020, estimated at VND 1,060,000 bn with an increase of 4.8%. The total current mobilized capital is now estimated at VND 1,200,000 bn, an increase of only 3.4% compared to 2020.
Credit growth higher than deposit growth was also the general trend in the commercial banking system in the first half of this year. As of 30 June 2021, the total credit balance of credit institutions in Ho Chi Minh City is estimated at nearly VND 2,690,000 bn, an increase of about 6% compared to the end of 2020. This growth rate is nearly two times higher than at the end of 2020, with an increase of 3.07% in the first six months of 2020. By the end of April 2021, credit only increased by 3.64%.
However, capital mobilization increased far too slowly. The growth rate of capital mobilization of banks in the first six months was equivalent to the same period last year, estimated at 3.5% compared to the end of 2020, and reaching almost an amount of VND 3,010,000 bn. In this, foreign currency mobilization decreased by 5.6% compared to the end of 2020, estimated at VND 345,000 bn with 11.5% of total deposits. Deposits in Vietnam dong also increased by 4.8%, estimated at VND 2,665,000 bn.
Data from the General Statistics Office shows that credit growth of the whole economy as of 21 June reached 5.47%, compared to the end of 2020. This figure is twice as high as the growth rate of 2.45% in the same period last year. However, capital mobilization of credit institutions only increased by 3.13%, as opposed to the same time in 2020 when the increase was 4.35%.
Indirect mobilization
In the first six months of this year, idle money flowed strongly into securities, with the expectation of earning more profit due to low deposit interest rates. Besides, the Covid-19 pandemic has continued for a long time now with people and businesses facing many difficulties, and savings deposits also falling. These factors affected the input of commercial banks. With deposits increasing too slowly but credit increasing rapidly, it is to be seen where the capital for lending by commercial banks comes from.
One financial expert believes that besides mobilizing capital from Market 1, the input of commercial banks is being supported with idle money from the State Treasury. By the end of May, the deposit balance of the State Treasury in commercial banks had increased to VND 63,000 bn, far higher than before. In 2020, banks also increased capital through paying dividends in shares, adding more resources for business activities, while another important source comes from the massive mobilization of bonds in recent months.
The Banking Finance Department, under the Ministry of Finance, said that the corporate bond market maintained a growth momentum and showed some positive results in the first six months of 2020. The private bonds issuance volume reached VND 168,702 bn, and the issuance volume to the public was VND 15,375 bn. In this, credit institutions were the largest issuers, accounting for 40.2% of the total issuance volume.
The bonds volume of real estate enterprises decreased by 55.5% over the same period in 2020, accounting for only 13.2% of total issuance volume. More specifically, the Vietnam Bond Market Association said that the group of commercial banks in the corporate bond market in the first six months of the year had a total issuance value of VND 68,113 bn.
Records from commercial banks also show that issuing valuable papers is a big goal this year. For example, HDBank plans to issue VND 11,500 bn of bonds in 2021, VIB also plans to issue VND 25,000 bn of valuable papers this year. The reason this channel is being promoted is that issuing bonds has more benefits than raising capital from Market 1, such as being able to supplement tier 2 capital, increasing the proportion of medium and long-term capital sources, and improving the capital adequacy ratio CAR.
According to many forecasts, the roadmap to gradually reducing the ratio of short-term capital for medium and long-term loans from the current 40% to 30% in 2023 as stipulated in Circular 08/2020 of the State Bank of Vietnam, will continue to push to encourage commercial banks to issue bonds in coming time. In Market 1, banks are adjusting to increasing deposit rates, but the increase cannot be too high as the economic demand is to reduce lending interest rates. By relying only on customer deposits, which is mainly short-term capital, banks will easily face liquidity loss.
The fact that commercial banks can change mobilization channels to create strong resources to support the economy should be a good thing. However, behind the issuance of corporate bonds, which bring a large volume of medium and long-term capital to commercial banks, there are points of serious concerns. Specifically, bonds issued by commercial banks with interest rates lower than half of the mobilizing rates of the same term were fully absorbed.
At many banks, the buyer of all issued bonds are securities companies. In this, there are some cases where issuing credit institutions and securities companies buying bonds are directly or indirectly related to each other. This development raises questions about the entrustment of capital to cross-invest in mutual bonds between credit institutions and securities companies to increase medium and long-term capital in order to cope with the regulation on the ratio of short-term capital for medium and long-term loans when mobilizing long-term capital in Market 1, which is still difficult.