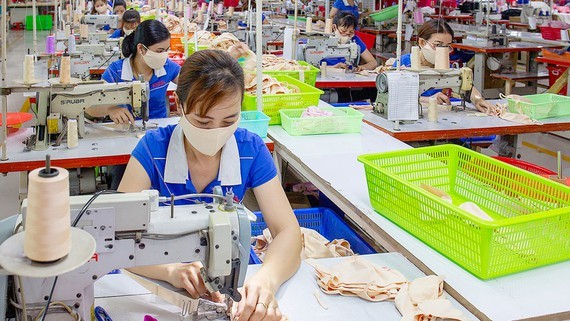 Most banks have agreed to cut the lending rate for enterprises hard hit by the Covid-19 pandemic. (Photo: SGGP)
This consensus was reached during a meeting of 16 banks with the State Bank of Vietnam on July 12.

The Covid-19 pandemic is having a negative impact on Vietnam’s economy and has forced many enterprises to suspend production or close entirely.

Thang said, to date, the bank had spent more than VND100 billion (US$4.3 million) on activities to support the community amid the pandemic under the direction of the Government and the banking industry.

“As for real estate businesses and exporting businesses which earned big profits or individuals who borrow money to buy cars, they should not be the subject of interest rate support,” Thang said.

Nguyen Viet Manh, a member of Agribank’s board of members, said Agribank also agreed to cut interest rates to support businesses. The bank’s leaders would meet to discuss the reduction rate but the average lending rates would decrease by about 1 percent, some loans could enjoy a drop of 2-2.5 percent.

Meanwhile, Deputy General Director of Military Bank Pham Thi Trung Ha said the bank would support businesses directly affected by the pandemic, whose revenues declined steeply, such as companies in the fields of tourism, accommodation and services with an interest rate cut of 1 percent or higher.

"However, MB will base on its customer database to select businesses in more difficulty, thereby having an appropriate interest rate support policy," Ha said.

Some banks said they would consult shareholders as cutting interest rates would affect their profit plans this year.

A representative of BIDV said a cut of 1 percent in lending rates would decrease its profit by trillions of dong this year.

Meanwhile, LienVietPostBank’s representative said with the bank’s total outstanding loans of about VND191 trillion ($8.23 billion), if it reduced lending rates by 1 percent, its yearly profit would decrease by about VND600 billion.

At the meeting, banks also asked the central bank to lift the credit limit in the last months of this year so that they would have more room to support customers.

Nguyen Thanh Tung, Deputy CEO of Vietcombank, said the bank had maintained low interest rates since the beginning of the year with the average short-term lending rate at around 6 percent per year and long-term rate 8 percent per year.

“At the beginning of the year, Vietcombank was assigned a credit target of 10 percent, but so far, credit has grown by 9 percent. Therefore, to continue to support customers, Vietcombank urgently needs to have higher credit 'room' in the last months of the year,” Tung said.

Loosening credit limits was also recommended by commercial banks such as SHB, TPBank and LienVietPostbank.

General Secretary of Vietnam Bankers Association Nguyen Quoc Hung also said banks still had to ensure the highest level of system safety due to the negative impacts of the global financial crisis. The pandemic's impact on the banking industry would have a time lag, so they needed to prepare solutions for themselves.

“Currently, the banking industry shares difficulties with businesses, but in the future, when bad debts increase due to the pandemic, who will share with the banking industry? Therefore, support must be in the spirit of ensuring system safety," Hung said.

He also proposed the State Bank consider assigning annual credit quotas, especially for the banks that have applied Basel II and Basel III which should be given priority in setting credit limits.