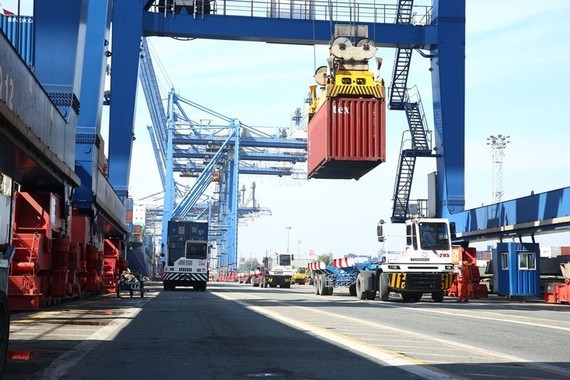 Referring to the increasing value of the US dollar, Mr. Nguyen Chi Trung, Chairman of the Board of Directors of the Gia Dinh Group, said that big exporters such as Gia Dinh shoes will certainly benefit as they will have more revenue to reduce the pressure of input costs which have been increasing continuously over the last months. Mr. Trung cited that the previous exchange rate was about VND22,600 for one US dollar and when an enterprise exported US$1 million worth, it could earn about VND22.6 billion. Now, if the exchange rate is anchored at VND23,900 for one US dollar than the figure will be about VND23.9 billion. It is true that there will be an immediate benefit to be seen by many export groups.

However, according to Mr. Nguyen Xuan Hong, Chairman of the Ho Chi Minh City Textile and Garment Embroidery Association, in general when the dollar appreciates it will be seen as favorable for many exporters, including textile and garment exporters. But now, what businesses care about is not how to benefit from the exchange rate, but for the market to become more unstable, as the demand for textiles in the world is showing signs of decreasing due to rising inflation concerns in many countries. Vietnamese enterprises and their partners are having to sit back and calculate on how to keep the markets stable, and no one should suffer too much damage. Mr. Hong believes that the pressure on the textile and garment industry will become clearer when they enter the fourth quarter.

Mr. Truong Dinh Hoe, General Secretary of the Vietnam Association of Seafood Exporters and Producers (VASEP), shares the same assessment of advantages and disadvantages of the market when the US dollar increases in value. He says that the benefit for export enterprises is positive but the demand for seafood in many markets will decrease. For instance, the demand from the Japanese market will decrease when the Japanese yen depreciates too much against the US dollar as Japan is one of the major markets for Vietnamese seafood exports.

Similarly, when the Euro depreciates against the US dollar, although Vietnamese enterprises will not be affected because most of their import and export transactions are in US dollars, the profits of buyers can decrease so they may reduce prices for Vietnamese exporters. All the same, when the local currency weakens, imported goods become more expensive. European consumers will consider spending and choosing essential items at more affordable prices, which reduces demand power. This factor is the most worrisome for all export businesses.

In fact, there is another concern when the US dollar increases, which is the cost of importing raw materials at current increased rates. Many export industries of Vietnam have to import raw materials from abroad, while the prices of many materials are constantly increasing. Therefore, the benefit is not necessarily for all exporters. Mr. Nguyen Ngoc Luan, Director of Global Trade Link Company says that exports are currently under extreme pressure and are not simply benefiting from the appreciation of the US dollar. He believes that in order to keep the supply chain stable, businesses will be forced to reduce profits, and the pressure in the last months of the year is also increasing.

Normally, the last months of the year are always the time when the Vietnamese export industry must accelerate pace to meet the needs of major global festivals of the year in many markets such as the US and Europe. But as analyzed above, in the last months of this year many industries may face a decrease in export growth. Shrimp exports are becoming one of the most worrisome products in seafood and last June they even recorded a negative growth. Till five months ago, the shrimp industry always showed double-digit export growth.

According to VASEP assessment, one of the reasons leading to the shrimp market deceleration is the decline in demand from markets such as the US and EU countries. Particularly for the US market, after five months of good growth, demand began to slow down and decline by June. Accordingly, shrimp exports to this market only reached $93 million, down by 36 percent over the same period.

Mr. Truong Dinh Hoe assessed that although in the first six months of the year the whole industry brought in nearly $6 billion, in the last six months of the year fulfilling the export target of $10 billion by end of 2022 will not be easy, even if fisheries are the essential item. Because inflation is so high in many countries, consumers will have to choose foods that are cheaper on their budgets. Essential goods such as seafood are seeing reduced demand, so other export industries such as wood are also under pressure in the last months of the year.

Yet if you look at the whole market, exports to the US have decreased, which has affected the industry as the US is a large market for the wood industry. The fact that many wood exporters agree with is that the demand for non-essential products by consumers in many countries is decreasing due to inflation concerns. Some enterprises in the industry are still facing the challenge of lack of orders in the last months of the year. Whether the wood industry reaches its original goal will still need time because businesses cannot anticipate on fluctuations, and there continues to be a growing undeniable pressure on all exports.