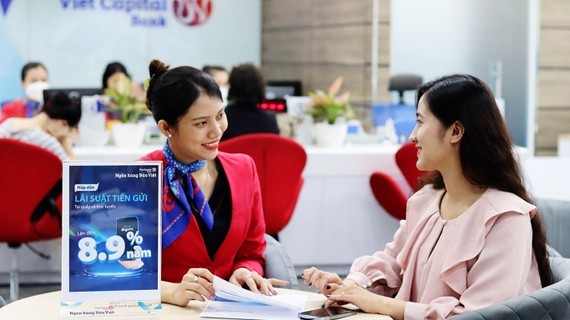 According to experts, the tense liquidity of the banking system has forced commercial banks to raise deposit interest rates to attract money to ensure liquidity. Data from the State Bank of Vietnam (SBV) shows that capital mobilization in the first nine months of the year was only about one-third of loans (deposits climbed by more than 4 percent, but loans surged by nearly 11 percent). The financial statements of the third quarter of 2022 of commercial banks also show that many banks have the loan to deposit ratios exceeding the allowed limit of 85 percent.

In the past time, the SBV has increased the benchmark interest rate twice in more than a month, with a total increase of 2 percent, in order to help commercial banks boost capital mobilization by high interest rates to ensure liquidity. However, it seems that it has not been able to relieve this tension yet. A leader of a commercial bank said that although bank liquidity was not exhausted, it still had to increase deposit interest rates to attract money to defend, especially when the interest rate race in the market is getting hot. Besides, despite raising interest rates, it is still difficult to mobilize capital because the SBV attracts Vietnamese dong through the treasury bill channel. At the same time, the credit limit is limited, so people and businesses are forced to use their own capital for consumption, production, and business activities, thereby reducing deposits in banks. In addition, recent violations related to corporate bonds have also affected the bank's liquidity.

Financial analysts forecast that deposit interest rates may continue to climb in the last months of 2022 due to increasing credit demand. Market liquidity will be under pressure when deposit growth cannot keep pace with credit growth. High demand for cash will continue to put pressure on the liquidity of the banking system.

The SBV raised the benchmark interest rate and the USD/VND exchange rate range, causing the lending interest rate to go up in tandem and the USD/VND exchange rate to rise sharply. Input costs increased, forcing banks to increase lending rates to ensure profits in business. Currently, lending interest rates for non-priority businesses have surged by 3-4 percent over the same period last year. Banks provide loans in the range of 9-11 percent per annum, depending on customer groups and loan objectives. Many businesses even have to borrow money at an interest rate of nearly 13 percent per annum.

Dr. Nguyen Tri Hieu, a finance-banking expert, said that the US Federal Reserve (Fed) had raised interest rates six times this year to 3.75-4 percent per annum. It is forecasted that interest rates will continue to advance further in the last months of 2022 and 2023, so it is reasonable for the SBV to increase the benchmark interest rates. Financial experts also said that when the Fed continues to raise the US dollar interest rate, the USD/VND exchange rate will fluctuate accordingly.

Dr. Nguyen Huu Huan, Head of the Finance Department of the HCMC University of Economics, said that the SBV raised interest rates to retain foreign capital flows and ensure system liquidity. Because if interest rates are too low, banks will not be able to mobilize capital, and liquidity will be difficult. However, raising interest rates will affect economic recovery and growth. Unfortunately, in the current global context, we cannot have both macroeconomic stability and high economic growth. Mr. Nguyen Quoc Hung, General Secretary of the Vietnam Bankers Association, said that it is impossible to ask commercial banks to keep lending interest rates unchanged in the context of increasing deposit rates. However, banks also need to increase lending rates at an appropriate level to share difficulties with customers.

Last October, the market was mainly affected by psychological factors and complicated movements of the world economy. Faced with that situation, the SBV quickly and promptly performed its regulatory role by deploying tools and solutions to provide liquidity support for the system. All banks ensure operational safety indicators according to the regulations of the SBV.

As an executive, SBV is ready to support liquidity to ensure the solvency of credit institutions, especially at the end of the year. The monetary and foreign exchange markets are under pressure and fluctuating, but that is the general context of countries worldwide, not only Vietnam. The important thing is that Vietnam's economic foundation remains fairly positive. In the coming time, the SBV will actively follow up and grasp the situation to come up with appropriate solutions and management tools with the right dose and time.

To solve the stressful problems in the foreign exchange market, it is necessary to increase supply, decrease demand, and flexibly adjust the anti-dollarization policy with interest rate tools to increase supply. When commercial banks can mobilize foreign currency at an appropriate interest rate, the bank can balance deposits and loans.