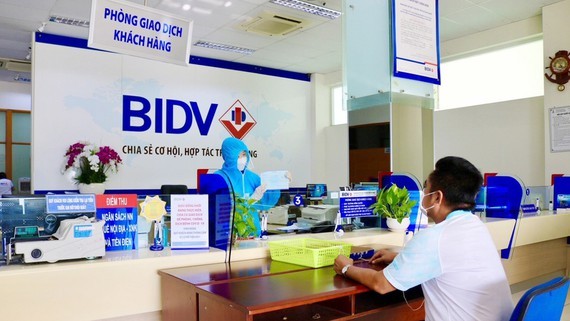 A customer does transactions at a branch of BIDV. (Photo: SGGP)
Low-interest rates make deposits reduce

With deposit interest rates decreasing, data from the State Bank of Vietnam (SBV) recently showed that capital mobilization growth in the first six months of this year was at a record low level of nearly VND5.3 quadrillion, merely up 2.94 percent compared to the end of last year. This is the lowest household deposit growth over the same period in the past ten years. The leader of a commercial bank recognized that as the savings interest rate would continue to be cut in August, it is difficult to avoid the decrease of capital mobilized from now until the end of the year. Currently, banks are under pressure to reduce input costs to cut lending interest rates to support businesses and the economy, so they cannot maintain high savings interest rates to attract idle money of people.

According to an analyst of SSI Securities Company, deposit interest rates will be under slight upward pressure, especially for long-term loans, because the SBV's regulation on tightening the ratio of short-term capital for medium and long-term loans will be effective next October. However, the lending interest rate level will continue to remain low in the coming time because inflation is forecasted to be in the control zone.

In fact, input interest rates continue to decrease, so lending rates also have a new turn of decrease after the interest rate cut in mid-July. Currently, many commercial banks have deployed more support packages for people and businesses in southern cities and provinces implementing social distancing following Directive No.16. Specifically, from now until the end of this year, Vietcombank will cut lending interest rates by up to 0.5 percentage points per year for all outstanding loans of customers in HCMC and Binh Duong Province. At the same time, it will reduce the lending interest rate by 0.3 percentage points per year for all outstanding loans of individuals and businesses in the remaining 17 southern provinces, except for loans for securities and real estate trading activities and loans mortgaged by valuable papers.

"Especially, customers who received lending interest rate cut in July will be considered to receive further cut, in which priority will be given to individual and corporate customers who are heavily affected by the pandemic," the leader of Vietcombank said.

Similarly, besides reducing the lending interest rate by up to 1 percentage point per year for all existing outstanding loans of customers affected by the Covid-19 pandemic, Vietinbank has just launched a low-interest credit package from 4 percent per annum, with a scale of VND20 trillion to support customers in severely affected industries, such as textiles and garments, footwear, pharmaceuticals, medical supplies, and essential consumer goods, increasing the total scale of the support package to VND150 trillion. Besides reducing interest rates for existing loan balances affected by the pandemic, the leader of Agribank said that the lender had decided to cut the credit card interest rate by 1.2 percentage points per year to 11.7 percent per annum - the lowest credit card interest rates on the market - for all existing individual and corporate customers.

Mr. Pham Nhu Anh, a member of MBBank's Executive Board, said that in the last five months of this year, interest rates of VND1 trillion will be axed for customers affected by the Covid-19 pandemic. By mid-August, the bank had reduced an accumulated interest of VND400 billion. In the second half of August, MBBank is estimated to reduce another VND300 billion, and the rest VND300 billion will be lowered in the last four months of the year. According to Mr. Pham Nhu Anh, at this level, about VND70 trillion of outstanding loans of individual customers and VND50 trillion of corporate ones will be lessened by 0.5-1.5 percentage points per year, depending on the customer and the extent of the impact.

Regarding the fact that many enterprises report that they still have not been able to access preferential policies of the bank, MBBank affirmed that it is reducing interest rates for priority customer groups following the regulations of the SBV and MBBank. Accordingly, for old customers in priority sectors, the bank will actively announce the interest rate cut in writing and send messages to them. Customers do not need to sign any documents or propose to MBBank. For newly disbursed customers, the bank will apply an interest rate cut of 0.5-1 percent compared to its current interest rate level.