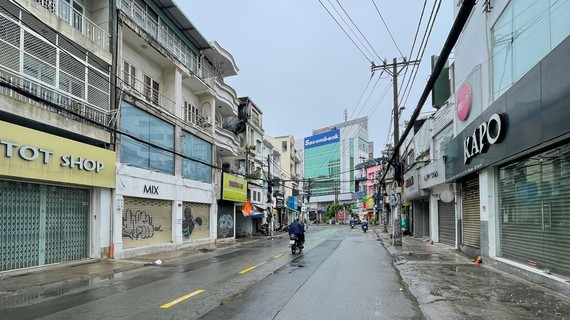 Many businesses have to suspend operations due to Covid-19 pandemic. (Photo: SGGP)
Beyond the repayment capacity

The State Bank of Vietnam (SBV) promulgated Circular No.14/2021, amending Circular No.01/2020 allowing the extension of the repayment period, exemption and reduction of interest rates and fees, and maintenance of the same debt group to support customers affected by the Covid-19 pandemic, effective from September 7, 2021. It is expected to be a lifebuoy to assist businesses timely. However, after nearly three weeks since Circular No.14/2021 took effect, many customers said this support had not been as expected yet.

Ms. Ngoc T., the owner of a private business in the food and beverage industry in Tan Binh District, HCMC, has an outstanding loan of more than VND10 billion at V. Bank. The bank told her that the interest rate would be reduced by 1 percent per annum, or the repayment would be delayed for six months, and loan interest would be equally divided for her to repay within a year later. However, from the beginning of July this year, due to social distancing following Directive No.16, her three restaurants in HCMC have been closed, so her company has no revenue. Therefore, an interest rate cut of 1 percent per annum is still beyond her ability to repay.

Not only corporate customers but individual ones are also under great pressure to repay loans. Many cases of home loans still have their interest rates increased because the preferential loan term expires. Ms. Huong K., a resident in District 11, said that after the expiration of the preferential interest rate of 7.6 percent per annum in the first year at S. Bank, the lender increased the interest rate to 10.5 percent per annum at the end of August this year. “I called the bank to ask for a reduction or postponement of interest payment to soothe the pressure of loan repayment and attached my salary sheet received through the bank account in the last three months to prove that my income has been affected by the pandemic. However, I have not seen feedback yet,” Ms. K. said. Similarly, Mr. Duc D., a resident in Binh Thanh District, shared that he borrowed VND400 million from V. Bank to buy a car to become an app-based taxi driver at the end of 2019. At present, he has to pay about VND10 million per month. However, when he asked the bank to reduce or delay repayment as he had had to stop working for three months due to the Covid-19 pandemic, his request was not accepted because the bank considered it was a consumer loan.

Circular No.14/2021 stipulates that customers in blocked areas can restructure debts for both outstanding loans arising from June 10, 2020, to before August 1, 2021, and overdue debts from July 17, 2021, before September 7, 2021. However, many people complained that they had not been notified of this restructuring by banks. Ms. Hong K., a resident in Binh Tan District, said that she could not go to the bank to pay her home loan interest because her residential area was blocked in the past four weeks due to F0 cases. This results in an overdue debt for her. She called the loan officer to have debt restructuring or interest rate cut following regulations, and the bank said that it was considering.

While many commercial banks have not yet considered debt structuring, some financial companies, such as Fe Credit, will postpone debt repayment for four months from September 2021 and extend the loan term by four months for customers affected by the pandemic. However, customers must prove that they cannot pay their debts on time under the contract due to the impact of the Covid-19 pandemic to receive debt restructuring and interest rate cut. At the same time, there must be a request to reschedule the repayment term, and the credit institution will evaluate the customer's ability to fully repay the principal and interest under the rescheduled repayment term or not. The procedures are not simple, so not all cases can be reduced or extended debt by financial companies.

The leader of the State Bank of Vietnam–HCMC Branch said that people and businesses eligible for an interest rate reduction, extension, and postponement according to the provisions of Circular No.14/2021 can make requests to the lenders. In case they are refused, the borrower can send feedback to the SBV. However, according to many enterprises, submitting a complaint will negatively affect the credit relationship between them and commercial banks, so most enterprises do not complain.

Lending interest rate decreases by 1.55 percent compared to before Covid-19