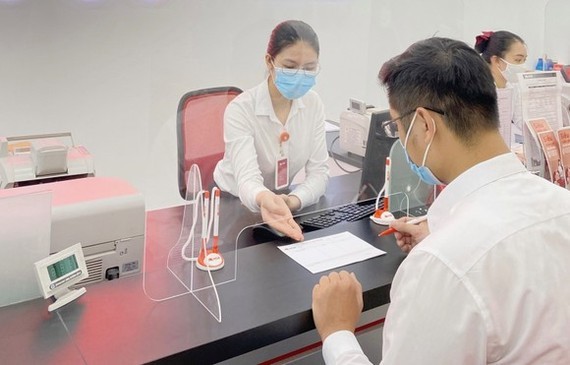 A transaction is being carried out in a bank

Accordingly, the first reason is a large amount of VND has been net withdrawn from banks as the State Bank of Vietnam (SBV) increases net withdrawal via treasury bills and foreign currency sales this August.

Secondly, SBV wants to maintain a higher interest rate of VND compared to USD in the interbank market to reduce pressure on the USD/VND exchange rate in the context of a strengthened USD because the Federal Reserve System (FED) maintains its roadmap to rise the policy interest rate.

However, it is estimated that the strong rise of the interbank interest rate is temporary and can stops anytime in the next few weeks as a result of a drop in exchange rates and supportive actions of SBV like net injection of liquidity into the market at the beginning of September.

“We expect that the stock market will gradually stabilize this week. The impressive gaining session at the end of last week to some extent brightened the mood of investors after a strong correction recently. The VN-Index will still be above the important support level of 1.220-1.240 points next week”, said Mr. Dinh Quang Hinh.

He mentioned the groups with promising trading prospects this quarter: retailing, food-beverage, electricity, petroleum, as well as the groups to receive support for infrastructure construction via disbursement of public investment.

By Ha My – Translated by Vien Hong