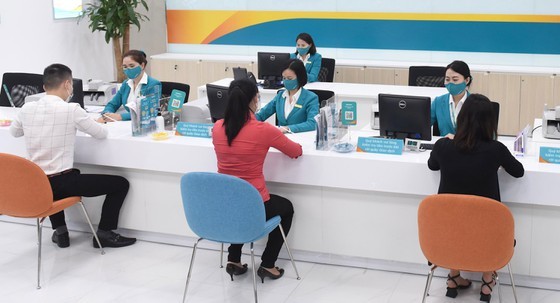 Illustrative photo. (Photo: SGGP)
Stopping disbursement due to running out of credit room

According to the State Bank of Vietnam (SBV), credit capital has increased sharply and hit the goal of supporting economic recovery after the pandemic, as it has mainly focused on lending in the field of production and business. Meanwhile, lending activities in other risky areas, such as real estate and BOT, are still controlled well. The banking industry is not totally closed its doors to real estate credit because good projects are still considered, and the individual home loan needs are still supported.

In the context that the economy has been absorbing capital strongly, many commercial banks no longer have credit room for lending, even when they are preparing to lend under the Government's 2-percent interest rate support package. The loan balance of this package is expected to reach hundreds of billions of Vietnamese dong. According to the Ho Chi Minh City Real Estate Association, after the SBV issued an official letter requesting credit control in risky areas, including real estate, over the past two months, capital borrowing by individuals and enterprises in this field is extremely difficult. Many real estate businesses have been thirsty for capital because their loan applications were returned by banks, mainly because their credit room has already run out.

Notably, the situation of many banks running out of credit room has given rise to some acts of oppressing and causing difficulties to customers at banks that still have credit room. Minh Hoang, living in Thu Duc City, HCMC, said that he had completed the loan application to buy an apartment in Thu Duc City to be disbursed in early June 2022. However, ten days before the disbursement, the lender informed Hoang that his loan could not be disbursed because its credit room had run out. This announcement made him stumble because he had completed the contract to buy the apartment. He rushed to some other commercial banks to ask for a loan, but he also received the answer that they had to wait for the SBV to grant a new credit room to lend. With no other choice, he had to accept a detour.

"Eventually, I had to accept to buy a life insurance policy worth VND80 million for the loan of nearly VND1 billion to be disbursed so that I can make payment for the apartment on schedule," Hoang said.

Not only individual customers but also corporate ones face difficulties when many banks run out of credit room. An enterprise that wants to stay anonymous said that to get loans at this time, even if they are loans for business or production activities, enterprises must buy insurance contracts from insurance partners of banks, depending on the loan amount.

Many banks are even struggling when they run out of credit room, and they have proposed to the SBV to ask for credit room expansion. MB Bank is an example. This lender said that the credit demand of individual and corporate customers of MB is extremely high, especially when it is launching the 2-percent interest rate support package.

Similarly, ABBank said that it had reviewed the credit plan and registered a limit of VND 572 billion to participate in the interest rate support package, equivalent to a size of VND28.6 trillion of the average loan balance within two years for subjects enjoying interest rate support. However, ABBank's credit balance in May 2022 is VND84.01 trillion, up 6.8 percent compared to the end of the year, and almost run out of credit room. Meanwhile, the beneficiaries of the 2-percent interest rate incentive program are expected to account for about 15 percent of ABBank's total outstanding loans, so this bank needs to be granted credit to have room to support enterprises.

Through factor of safety

The credit limit is one of the hot topics raised at the 15th National Assembly. Many deputies said that the credit room granting has the appearance of subsidy management and is no longer appropriate in the current context. In addition, applying the credit room mechanism when the 2-percent interest rate support package is being implemented will easily lead to the risk that banks have money but cannot provide loans. Meanwhile, lending to recover production after the pandemic following Resolution No.43/2022 of the NA is extremely urgent. 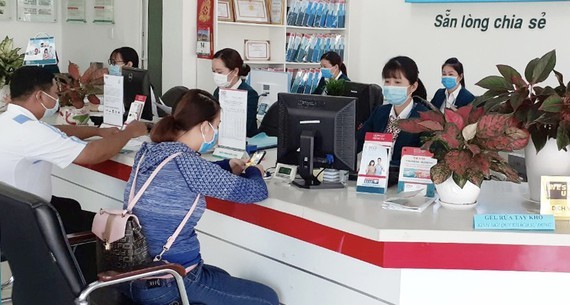 Illustrative photo. (Photo: SGGP)
Governor of the SBV Nguyen Thi Hong once explained that the peculiarity of the Vietnamese economy is that investment capital depends heavily on bank credit. Currently, credit capital to GDP is at 124 percent, so Vietnam is one of the countries where this ratio is the highest globally. Therefore, when there are fluctuations in the global economy, enterprises and people have difficulties in production and business activities, the banking system will be immediately affected. Controlling credit growth is necessary because if banks encounter problems or are unable to pay, it will have a chain impact on the whole economy.

Previously, when the credit room was not controlled, some banks had very high credit growth, up to 30-53.8 percent, creating interest rate races to mobilize capital sources. Since 2011, when the bank applied measures to manage the credit room, the monetary market management has been more positive, and credit has stabilized again.

As for the concern that this credit limit will block cheap capital flows to borrowers, the SBV Governor said that every bank wanted to increase credit growth. However, if all the desired limits of commercial banks are met, Vietnam’s macro-economy will not be stable as it is now.

However, many experts still believe that, instead of controlling credit by administrative measures as currently, the SBV can be flexible and apply more market-based tools because, at present, there are a few countries that still use credit room granting tools like Vietnam.