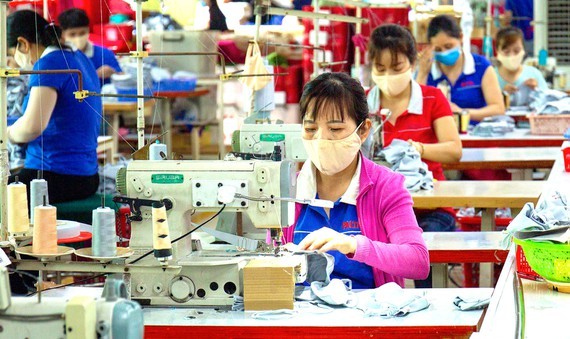 Enterprises expect interest rates to decrease further to quickly recover the economy. Production at Nguyen Dung Textile Company in District 12. (Photo: SGGP)
More loan packages
According to the SBV, by early September this year, credit institutions have exempted, reduced, or lowered interest rates for over 1.13 million customers with a total outstanding balance of over VND1.58 quadrillion; provided loans to 628,662 new customers at a lower interest rate than before the pandemic, totaling VND4.46 quadrillion.

From January 23, 2020, to August 31, 2021, the total amount of interest that credit institutions exempted, reduced, or lowered for customers was about VND26 trillion. In which, the total amount of interest that 16 commercial banks committed to reducing from July 15 to August 31 was more than VND8.86 trillion, accounting for 43.01 percent of the commitment.

Besides, credit institutions have restructured the repayment period and kept the debt group unchanged for 215,320 customers, with an outstanding balance of more than VND227 trillion. Accumulated debt value that was restructured from January 23, 2020, reached roughly VND520 trillion. In Ho Chi Minh City alone, the outstanding balance of restructured and interest-rate-reduced loans for customers by the end of August exceeded VND1.61 quadrillion, mostly for businesses facing difficulties because of the Covid-19 pandemic.

To continue to support customers, as well as stimulate credit demand in the last months of the year, besides the committed support packages, many commercial banks also have had many additional methods to support customers to resume production and business activities and solve some individual needs after social distancing loosened. For instance, BIDV has just launched a package to help small traders to return to business.

Accordingly, business households and small traders only need to prove their business activities to access the loan package, with interest rates from 5.3 percent per annum. And BIDV will grant a credit card with a limit of up to VND100 million.

ACB’s representative also informed that a capital source of up to VND10 trillion with an interest rate from 5 percent per annum upwards was ready to meet the capital needs of individual customers and enterprises to restore production and business activities. Especially, in the first days of October, business households when making disbursements would be reduced by 0.2 percent per annum further.

Not only supporting businesses, but MSB will also deploy a financial solution package to support customers who are parents from now until the end of November this year. Specifically, MSB applies a policy of opening credit cards for parents of pupils and students without proving their income and the credit limit based on tuition.

Be cautious with bad debt

To continue removing difficulties in capital for businesses, the SBV said that an interest rate support package of VND3 trillion was expected to be launched in October this year, equivalent to a loan balance of about VND100 trillion.

According to Mr. Nguyen Tuan Anh, Director of SBV Credit Department for Economic Sectors, at this time, it is necessary to have more support packages to share difficulties and assist enterprises to restore production and business activities. However, there must be a clear and specific mechanism for the policy to be effective to achieve the most important goal of macroeconomic stabilization and inflation control.

In 2009, there was a package of VND17 trillion to compensate interest rates for businesses. Although the policy had a certain effect, until now, bad debts have not been handled yet. Therefore, experts said that besides resources, the new mechanism would be the key to deploy the interest rate support package smoothly and control risks, avoiding repeating the same mistake.

The leader of a State-owned commercial bank explained that, according to current regulations, enterprises must ensure no bad debt and have revenue, profit, and collateral to ask for loans. According to this regulation, most businesses will not be eligible for loans, and even if commercial banks want to support them, they cannot reduce their lending standards. This entanglement needs to be solved by the SBV.

Accordingly, commercial banks need a clear mechanism to consider lending to businesses in the current context. Dr. Nguyen Quoc Hung, General Secretary of the Vietnam Banks Association said that the bank needs the intervention of the authorities to make the policy appropriate, timely, and effective. "The government can issue bonds and borrow from the central bank like other countries to have enough resources to support the economy," Dr. Nguyen Quoc Hung suggested.