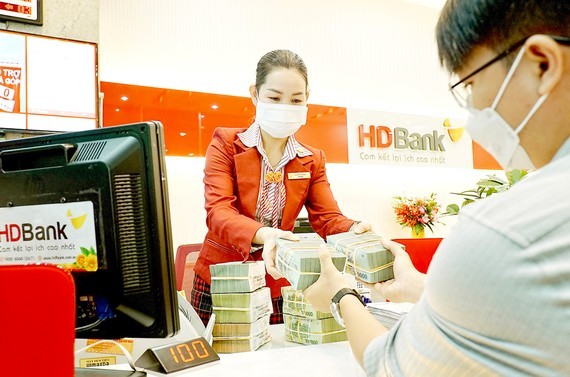 Commercial banks are allowed to expand room for credit


Recently, based on the application of commercial banks and the ranking score of the State Bank (SBV) through factors such as reducing lending interest rates to support businesses and people, restructuring credit in potential areas of risk, participating in supporting the handling of weak credit institutions, commercial banks have just been granted an additional credit room of 1 percent-4 percent.
Amongst them, state-owned commercial banks have a specific increase. Specifically, Agribank was allowed to increase by 3.5 percent (equivalent to VND 50,000 billion ) while Vietcombank was permitted to raise by 2.7 percent (about VND26,000 billion) and VietinBank and BIDV were allowed to expand their room by nearly VND20,000 billion in total respectively and MB by 3.2 percent ( or VND 12,000 billion).
Other commercial banks are increased at about 1 percent to 3 percent, equivalent to a credit level of over VND 10,000 billion for commercial banks with medium and large credit scales, while commercial banks with small credit scales are increased at VND1,000 -VND3,000 billion.
In the first eight months of 2022, credit growth has reached 9.91 percent. With a credit growth target of 14 percent, in the last four months of the year, about VND457,000 billion is expected to be allocated to commercial banks. Many economic experts expect that this additional room will partly help businesses access to credit after a long time of having thirst for capital. However, the remaining credit level is considered to be difficult to meet all capital needs, when enterprises are preparing for the peak business season at the end of the year.
In fact, after many days of loosening the credit room, not many businesses have been disbursed, even though the loan application was completed a few months ago. Many commercial banks said that they have not yet received new loan applications, but only focused on settling contracts that have been signed but have not been disbursed.
For instance, a director of a private petroleum company said that BIDV additionally disbursed VND2 billion to him - the amount he was cut off by the bank two months before the contract's due date because the bank had no credit room. He disclosed that interest rates are up about 0.5 percent now, but it’s fine as long as he has been granted capital for his business.
However, because of volatile domestic petroleum trading, he has applied for an additional loan of VND3 billion, but the bank said that it has not been resolved because it is focusing on disbursing funds for businesses that have signed commitments before. Many businesspersons in the petroleum industry also said that they had made loan documents at other banks such as HDBank, VIB which had not disbursed the grant to them because these banks were processing the documents in order.
Not only businesses waiting for capital, but many people who borrow money to buy houses also have difficulties. For instance, a resident in Thu Duc City said that four months ago, she made a loan application at a state-owned commercial bank with a preferential lending interest rate in the first year at 8.7 percent a year, but the bank has not disbursed it because the bank ran out of credit room. After the bank was allowed to loosen the room, she asked, the bank said that the interest rate for buying a house was 12 percent a year, in the first two years, the loan was at 9.5 percent a year. However, the bank has to review it before replying to her because the credit space is not much extended.
Experts said that in the last round of credit room granting, the regulator may not have used up the full-year growth room of 14 percent and the State Bank may allocate it in several phases in the near future. Most commercial banks that have received capital increases said that they will give priority to lending capital in priority areas and essential industries of the economy.
Vietcombank's leaders informed that in order to be extended by 2.7 percent of the credit balance to a maximum of 17.7 percent by the end of 2022, Vietcombank must be rated A (good) by the State Bank. Accordingly, with about VND 26,000 billion in loans from now until the end of the year, Vietcombank will continue to control credit and prioritize growth in essential sectors and industries of the economy, priority areas of the Government. in order to well control liquidity, and credit risk and ensure low bad debt.
As a private commercial bank with the highest room expansion this time with 4 percent, bringing the total credit growth limit for the whole year to 11 percent, from now until the end of the year, Sacombank has about VND15,000 billion more to lend. A leader of another commercial bank said that this bank was allowed a credit increase of over 3 percent adding that the demand for capital for production and business at the end of the year is usually very high, not to mention the demand for consumer capital also increases; therefore, the newly allocated credit level is difficult to meet capital needs in the market.
He announced if the bank can’t extend its credit room further, it must also solve matured debts to expand the room for new credit, and re-select new lenders. At the same time, the bank will promote more services, cross-sell products, and insurance businesses to increase non-interest income.
Many small commercial banks that have not yet been allowed to increase their capital in this phase said that they will adjust the current loan portfolio as well as reduce outstanding loans with some large corporate customers borrowing low-interest rates to switch to personal loans with higher interest rates to ensure the set profit targets.