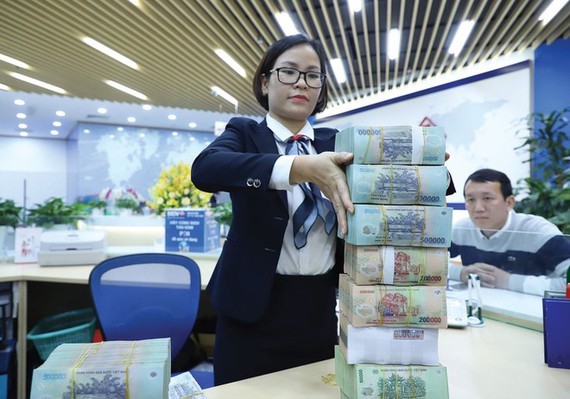 Illustrative photo
However, this approach has not seen improved results due to capital ownership ratio of foreign investors in commercial banks having remained at the same level  for the last many years.

In July 2021, OCB announced to lock foreign investment ratio at 22%. This shows that the bank is calculating on finding strategic foreign investors to sell the remaining capital, with total foreign capital in a bank to not exceed 30% of charter capital. For the last one year many banks are locking foreign room to increase capital. For instance, Techcombank is limiting foreign ownership at 22,4908%. In mid-August this year, SHB also temporarily locked the room for foreign investors at 10%, and at the end of April 2021, VPBank fixed the maximum foreign ownership ratio at 15% to clear the way for foreign shareholders. At the end of 2020, HDBank also adjusted the foreign room from 30% to 21.5%, with goal of serving a cooperation plan with foreign strategic partners.

For Vietnamese banks, finding foreign strategic investors to improve their financial and governance capacity is a common goal. However, from 2013 until now, finding foreign investors has been a difficult task, as many foreign strategic shareholders earlier had parted ways from Vietnamese Banks, which included a wave of foreign banks divesting capital in Vietnamese banks, with big names such as Standard Chartered, HSBC, ANZ, Bank of America, and Deutsche Bank.

In the last five years, the banking industry has only had a few notable big deals such as BIDV making a successful private placement of 15% of share capital in Hana Bank in 2019, and OCB selling 15% of shares to partner Aozora. Many other banks have also shaken hands with foreign partners, but the ownership rate is less than 5% of the bank charter capital. This shows that Vietnamese banks are very much in need for foreign strategic shareholders, and are very much looking forward to the entry of new strategic partners.

While banks still have room for strategic foreign investors, they attracted cash flow from foreign investors to make profits from transactions of buying and selling outstanding shares. Accordingly, the room for the foreign room was filled, affecting capital mobilization from strategic investors.

The above difficulties come from an old but still hot story related with commercial banks. Commercial banks have repeatedly pointed out that finding and choosing strategic partners is difficult, but negotiating to get to the final result is even more difficult because the biggest obstacle is focusing on the equity ratio.

When foreign investors joined Vietnamese banks, they had to accept very low interest rates. For a period of time, many banks even did not pay dividends so as to focus on restructuring. This is a big disadvantage in maintaining cooperation with foreign shareholders. Maybe at first foreign investors, specifically foreign banks, join Vietnamese banks with the assumption of accepting a very low profit in order to find added value for their investment in the future. Specifically, after a period of time and better understanding of the market and local customs, they separate to operate independently when the conditions for establishing a joint venture bank, a 100% foreign-owned bank, or foreign bank branches is increasingly open to economic integration.

The root cause of dispute lies in the percentage of ownership. A financial expert shared that within the prescribed rate, although you become a major shareholder in a Vietnamese bank, a foreign investor does not have the authority to decide all issues related to the organization and operations of the concerned bank, leading to conflict between strategic shareholders and the Board of Directors. Therefore, the strategic shareholder leaves while another shareholder has not yet entered.

This particular expert also thinks that the bank foreign room lock maybe for the cooperation plan with strategic investors in the near future but it could also be just a trick to paint a congenial picture of operations. Locking the room at a lower level than the ceiling creates the impression that the bank keeps this room for other partners, but it is possible that for foreign investors who have dived in, the bank has no choice but to reduce that ratio and lock it up to avoid large fluctuations in stock prices.

Mr. Nguyen Quoc Hung, General Secretary of the Vietnam Bankers Association, said that regulations on share ownership ratio of foreign investors should be classified by group. This could show, which bank has completed Basel II, is continuing to improve Basel III, or can raise the foreign shareholder capital contribution ratio to 30% higher than the prescribed rate. However, raising the capital contribution ratio must ensure harmony between the interests and needs of investors with the role of state management.

Broadly speaking, many experts believe that in order for Vietnam to enter the world of global finance, it is necessary to have at least one or two banks active in major financial markets such as in New York, London, or Tokyo. In order to do so, commercial banks must have banking on a very large scale, create trust with potential shareholders, and in particular Vietnam must open more room for foreign investors. If Vietnam continues to maintain such a low level of room as at present, it will restrict the listing of shares in foreign financial markets.