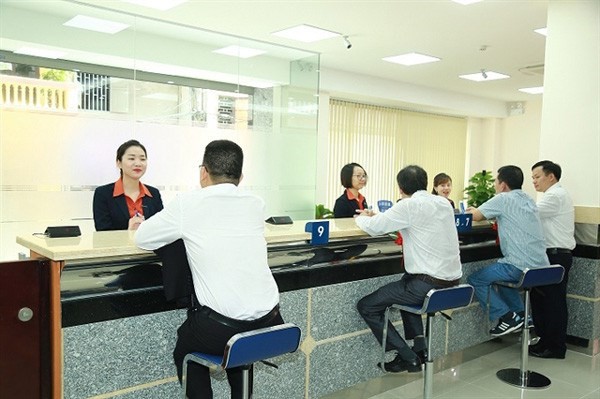 Illustrative image (Photo: Sacombank)
According to the World Bank (WB), if including potential NPLs from restructured debts, the number of NPLs in the Vietnamese banking system is not low and must be continuously monitored.

The State Bank of Vietnam (SBV) last year issued Circular No. 14/2021/TTNHNN. Under the circular, the SBV told banks to reschedule debt repayments to help customers affected by the Covid-19 pandemic until June 30 this year. The circular also allowed banks to keep the debt classification for Covid-19 borrowers unchanged.

Experts forecast the NPLs of banks may continue to increase when Circular No. 14/2021/TT-NHNN expired on June 30 this year. When not being extended, many debts will have to be listed in worse debt groups if customers do not pay their debts on time, which will cause NPLs to increase.

In the context of rising potential NPLs and limited capital supply to the economy in the coming period, SBV Governor Nguyen Thi Hong has recently issued Document No.5962 requesting the Vietnam Asset Management Company, Vietnamese and foreign banks to continually handle bad debts according to Resolution No. 42/2017/QH14, which includes accelerating the handling of NPLs and collaterals of bad debts; and proactively and actively coordinating with police, tax and court agencies at all levels and other relevant agencies to effectively implement policies dealing with NPLs, such as seizing collateral and applying shortened procedures in disputes related to collateral at courts.

Banks have been also very enthusiastic about the handling of collateral assets and debt recovery. They have continuously promoted the sale of NPLs’ collateral. Sacombank, for example, has recently announced it will continue to auction 19 apartments of the Xi Grand Court project while BIDV will also put for auction 1ha of land in Chon Thanh Industrial Park and many assets attached to the DIC Binh Phuoc cement factory with a starting price of VND31.85 billion. Previously, BIDV announced an auction of the debts of two other companies with outstanding loans of VND940 billion.

However, the sale of real estate collateral has encountered many difficulties although banks have actively advertised on media and lowered prices. For example, Sacombank has to drastically reduce the price of 19 apartments in the Xi Grand Court project from VND100.8 billion to VND79 billion. These apartments were put for sale for the first time in July 2020, but after two years, Sacombank could not sell any apartments and had to reduce prices sharply.

Can Van Luc, chief economist of BIDV, said that the sale of real estate collateral assets is facing difficulties because the realty market is quiet with liquidity dropping sharply.

OCB General Director Nguyen Dinh Tung also admitted the settlement of bad debts is currently more difficult than in the previous period. Currently, although borrowers want to sell their real estate as mortgages to pay debts to banks, it is difficult to find buyers because of the poor realty market liquidity. Therefore, bad debt settlement at banks is slower.

Besides, Luc suggested streamlining Resolution No. 42/2017/QH14 to better deal with bad debts.

“One of the major problems when dealing with bad debts currently is the handling of collateral. A credit institution's right to seize collateral assets is one of the key contents in Resolution 42, but it does not specify regulations when the borrowers do not cooperate. Therefore, it is necessary to have a law on bad debt settlement with a stronger legal framework,” he said.

Lawyer Truong Thanh Duc, director of ANVI Law Firm, also said Resolution 42 has a good effect in dealing with bad debts. However, the policy still needs to be further streamlined to improve the handling of bad debts in the banking industry.