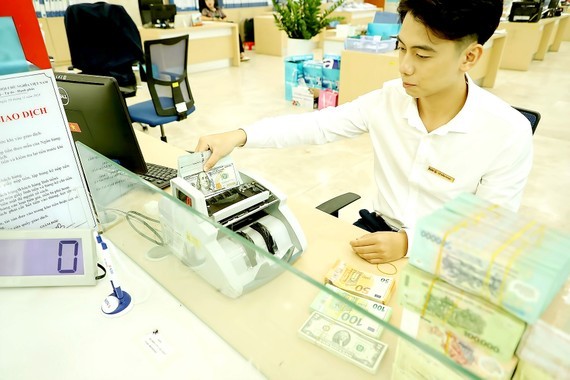 The State Bank of Vietnam (SBV) officially decided to widen the USD/VND spot exchange rate band from +/-3 percent to +/-5 percent
Following the dollar’s appreciation, General Director of Duy Khuong Steel Trading Service Company Dinh Cong Khuong said that 20 percent-30 percent of raw materials for steel production must be imported, so the price of imported raw materials must surge. Increased raw material plus production costs will push up the estimated cost of finished products by 1 percent-3 percent. Meanwhile, short-term orders cannot negotiate with partners to adjust prices.
On the other hand, from the beginning of the year until now, the sharp increase in gasoline prices has hurt the profits of the steel industry. The current increase in the US dollar price will make businesses’ profits fall to zero percent.
Worse, enterprises in the steel and plastic industries are facing the risk of a decline in the construction market. The quiet real estate market has caused the demand for steel and plastic to drop sharply from the third quarter of 2022 until now.
According to Mr. Khuong, the real estate market consumes 45 percent of steel products. Therefore, the reduction or cessation of real estate project licensing, combined with policies on tightened bank credit, has made this market quiet, leading to a sharp decrease in steel consumption. Currently, enterprises are trying to maintain minimum production so as not to interrupt operations.
Many businesses in the field of food and food products think that this is the peak time for enterprises to import production materials to increase their reserves for preparation for the Tet holiday (the Lunar New Year) - the peak consumer demand. In Ho Chi Minh City, enterprises producing essential goods had to prepare a plan to increase their stockpiles from 24 percent to 60 percent to avoid the risk of a shortage of goods and an increase in prices at the end of the year.
However, it must be admitted that up to 60 percent of raw materials for food production must be imported from abroad. In recent times, many enterprises have tried to find domestic supply, but they failed. Therefore, the appreciation of the US dollar will certainly have a significant impact on product prices. Enterprises said that they would have to adjust certain selling prices if additional costs are incurred because many businesses have made concerted efforts to control prices for a long time when gasoline prices increased. 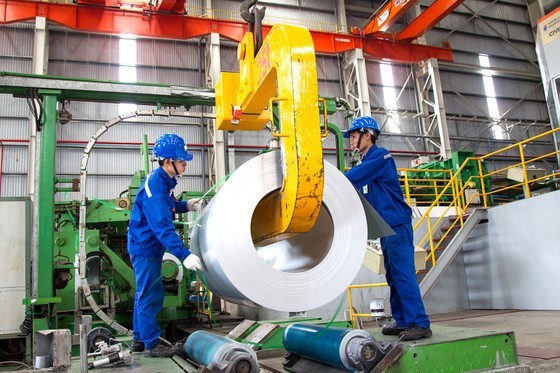 Adjustment of Vietnam dong's daily trading has certain effect on production
Furthermore, a leader of a commercial bank in Ho Chi Minh City said that businesses borrowing debt in the US dollar have faced difficulties in recent times due to the strong US dollar pressure and the devaluation of the Vietnam dong. These enterprises will continue to be under exchange rate pressure at the end of 2022 as well as at the beginning of 2023 when they still have outstanding loans in US dollars.
He added that in theory, when the domestic currency depreciates, the country's goods will become relatively cheaper, thereby supporting the export of goods. However, Vietnam implemented a policy of floating within the range of the US dollar, which also led to a stronger Vietnam dong compared to some other currencies, especially in big markets such as Europe, Japan, Korea, and China. Besides, increasing inflation in the globe plus people’s declined real income leads to a challenge for exporting enterprises in the coming time.
Vo Tri Thanh, Director of the Institute for Brand and Competitiveness Strategy, said that in the context of great pressure on the exchange rate and inflation, it is necessary for the State Bank to widen the exchange rate band in order to stabilize the foreign exchange market. This is also a way to reduce partial pressure on the exchange rate while finding a new equilibrium more suitable for the exchange rate and also creating room for more flexible and proactive monetary policy management.
Loosening the exchange rate adjustment band is just one of many solutions and tools that the SBV has implemented to help stabilize the exchange rate relatively in comparison with exchange rate fluctuations of many other countries, as well as in the context of foreign exchange rates. The US Federal Reserve (FED) and many countries continue to tighten their currencies and raise interest rates.
Previously, in order to stabilize the exchange rate, the SBV used measures such as using the foreign exchange reserve fund, raising interest rates, and changing the foreign currency trading method from selling 3-month term to selling spot method. Therefore, this band widening is part of many other tools that, to a certain extent, help balance all dimensions including inflation, interest rates, exports, imports, and VND depositors' benefits to curb a negative impact on the country’s economy.
After the State Bank loosened the USD/VND exchange rate band, the central exchange rate listed by the SBV on October 18 increased by 56 Vietnam dong compared to the previous day to VND23,637 per US dollar.
Thus, with a margin of ±5 percent, the ceiling rate increased to VND24,818 per US dollar. Recording the price of USD at commercial banks on October 18, commercial banks sold the greenback for VND24,500 per US dollar. Although the USD price was adjusted by commercial banks, it was still lower than the ceiling price by about VND318 per US dollar. Thus, compared to the end of 2021, the US dollar price at banks has increased by about 7 percent ( equivalent up to VND1,580 a dollar).