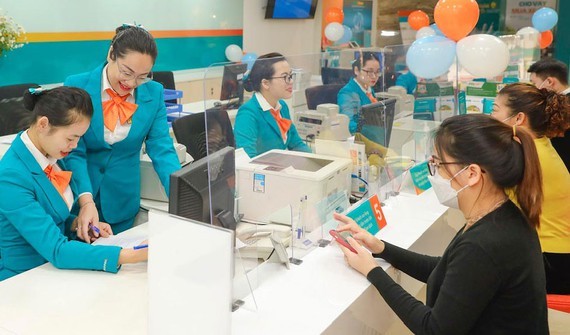 The breakthrough in credit at the end of the year is the driving force for the strong increase in banking profits. (Photo: SGGP)
Credit increased by nearly 14 percent

Currently, not many commercial banks report their business results in 2021 yet, but the figures a few banks have just announced show that they have good business results. Besides the core business of credit, diversifying revenue from services and digital transformation has also contributed to increasing profits for the bank.

Specifically, Agribank announced an estimated pre-tax profit at VND14 trillion, up about 7 percent compared to 2020. Agribank's credit growth increased by 8.5 percent, of which 70 percent of outstanding loans for agricultural development, farmers, and rural areas. Although not disclosing the specific figure, Vietinbank's leaders said that the pre-tax profit in 2021 exceeded the target at VND16.8 trillion. In which, credit growth in 2021 of Vietinbank rose by 12.3 percent compared to the previous year, while non-interest income from banking and financial service solutions also surged by 20 percent.

Similarly, BIDV has just announced a profit exceeding VND13 trillion. Of which, BIDV's credit growth touched nearly 12 percent according to the assigned target but accounted for more than 13 percent of the credit outstanding balance of the whole economy, leading the market in terms of credit market share. Vietcombank has also completed its set plan at more than VND25.5 trillion. Its credit growth edged up by nearly 15 percent compared to 2020, and other revenue sources from services, such as card payment, international payment, and commercial payment, also rallied by 20-24 percent.

Not only did large State-owned banks do well, but private commercial banks also had profits exceeding the plan. For instance, TPBank had a pre-tax profit of nearly VND6.04 trillion, up 40 percent compared to 2020, exceeding 4 percent of its target. MSB had an estimated profit of VND5 trillion, doubling that of 2020. Besides, some commercial banks also have had a sharp increase in profits, thanks to high credit growth. Specifically, Techcombank forecasts that pre-tax profit in 2021 will reach VND23 trillion, up 46 percent over the same period, thanks to high credit growth at 22 percent. Sacombank's profit in 2021 is expected to jump by about 30 percent at VND4.4 trillion because the credit limit is expanded to 10.5 percent. MB Bank achieves an estimated profit of VND16.5 trillion, up 54 percent compared to 2020, due to the credit extension of 21 percent.

Financial experts said that banking was a rare industry that posted growth over the past time, despite the prolonged Covid-19 pandemic. The profit picture of the banking industry in 2021 remains bright, mainly due to the recovery of capital demand of the economy in the last months of 2021. Many commercial banks have been extended credit limits by the State Bank of Vietnam to inject capital into the market to serve production and business activities. The breakthrough in credit at the end of the year was the driving force for the strong increase in banking profits. According to the latest update, the credit growth of the whole economy in 2021 reached nearly 14 percent, while it had initially been expected to increase only about 12 percent, a financial expert said.

Although banking profits remained good, banking stocks fell sharply in the last six months of 2021. The group of ten large banking stocks on the Ho Chi Minh City Stock Exchange (HoSE) decreased by nearly 10 percent on average. According to analysts, one of the main reasons for the decline in banking stocks is that investors were afraid that the business activities of banks would be affected by the impact of the Covid-19 pandemic, especially risks of bad debts would erode banking profits.

However, securities companies assessed that the banking industry would have a positive prospect in 2022 when the economy and debt repayment capacity of enterprises gradually recover. Moreover, to avoid making the same mistakes, many commercial banks sharply increased provisions for risks to cover bad debts. For example, BIDV has a bad debt coverage ratio of 235 percent, the highest in recent years. Similarly, VietinBank has raised its bad debt coverage ratio from 132 percent at the end of 2020 to 171 percent at present. Especially, Vietcombank has a bad debt coverage ratio of up to 424 percent, the highest level in the banking industry, setting aside 100 percent of provisions for the entire loan balance structured following Circular No.03/2021 of the SBV, two years earlier than prescribed. "If there is, bad debt can only happen in weak banks and banks with thin reserve buffers," said a financial expert.

According to Viet Dragon Securities Company (VDS), the supportive monetary policy in 2022 will continue to be maintained with the expectation of injecting more money into the economy through credit growth. Combined with the condition of stable liquidity in the short term, credit is expected to grow robustly in the first six months of this year, so banking stocks will soon attract the cash flow again. "Of course, stock prices will have a strong divergence following profit growth rate, and it is a private story for each bank," said a VDS analyst.

In fact, in the past week, when the stock market plunged due to a series of negative news, banking stocks have partly shown their role as the leading stocks to keep the green color. Experts forecast that banking stocks will attract investors' cash flow in the near future.