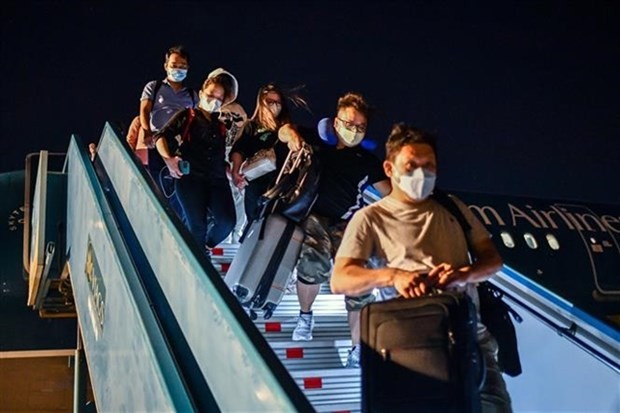 According to the Civil Aviation Administration of Vietnam, the domestic market began to recover from April, grew again in May and had strong growth in June. In June alone, the domestic market welcomed 5 million passengers, an increase of 20.9 percent compared to May and an increase of 38.8 percent compared to June 2019 - the peak summer month before the Covid-19 pandemic. The seat occupancy rate on domestic routes in June was high, ranging from 85 percent to 87 percent depending on the airlines.

Le Hong Ha, General Director of Vietnam Airlines said at the annual General Meeting of Shareholders that the Vietnamese airline market would see many positive changes because the Government had reopened and resumed domestic flights and international flight routes. However, the international airline market would still face many difficulties because of complicated disease developments, a sharp decline in vaccine effectiveness and high input fuel prices.

Ha said that the tourists travelling were mainly Vietnamese. The number of foreign customers had not been able to recover as before the pandemic. Dang Ngoc Hoa, Chairman of Vietnam Airlines quoted forecasts that the world aviation market will recover by the end of 2024.

SSI Research also assesses that the profit growth of enterprises in the airline industry this year is forecast to grow insignificantly because the resumption of international routes is estimated to be slow, as key markets such as China, South Korea and Japan have yet to fully reopen. Therefore, the profit of the whole industry is estimated to increase more strongly from 2023 onwards.

The Vietnam Airlines Corporation (ACV), the unit that directly manages 22 of 23 civil airports in Vietnam, has had a bumper quarter. It recorded net revenue of VND3.43 trillion in Q2, 2.5 times higher than the same period in 2021. In which, revenue from aviation services reached VND3.27 trillion, up 123 percent year-on-year. Financial revenue reached VND1.91 trillion, twice as much as in the second quarter of 2021 thanks to an increase in exchange rate differences.

During Q2, this unit made a net profit of VND1.47 trillion thanks to the difference in exchange rates. Financial expenses and general and administrative expenses both decreased while selling expenses increased. ACV collected VND2.6 trillion in profit after tax, 7.6 times higher than the same period last year.

In the first six months, ACV's net revenue reached VND5.56 trillion, up 61.5 percent compared to the first half of 2021.

However, the high oil price is one of the big hurdles for Vietnamese airlines. As of June 30, Brent oil traded around US$106 per barrel, up 37.6 percent compared to the beginning of the year.

Vietnam Airlines (HVN) announced its second quarter business results with revenue of VND18.3 trillion, 2.8 times higher than the same period last year. However, the cost of goods sold increased strongly to VND18.7 trillion, 3.3 times higher, causing the company to have a gross loss of VND377 billion.

Revenue from financial activities reached VND149.1 billion, up 5.4 percent compared to last year. Selling and administrative expenses increased by 111.8 percent and 6 percent, respectively. Besides, financial expenses were VND1.15 trillion, 2.7 times higher than the same period last year. As a result, Vietnam Airlines suffered a loss after tax of VND2.6 trillion, down from the loss of VND4.53 trillion in the second quarter of 2021.

At this year's Annual General Meeting of Shareholders, Tran Thanh Hien, Chief Accountant, explained that although this year the Government had completely opened up the flight routes, the price of jet fuel had increased, as had operating costs.