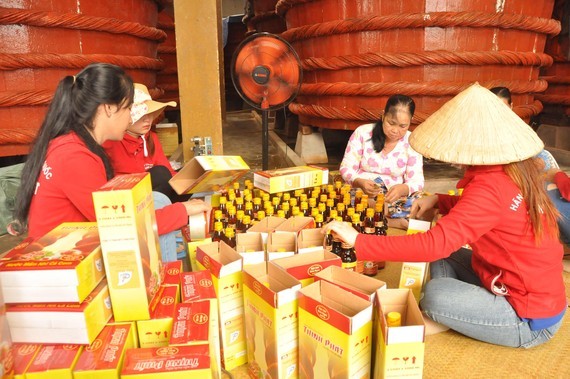 According to Deputy Minister of Agriculture and Rural Development Phung Duc Tien, many brands of fish sauce in Vietnam are not only popular domestically but are also increasingly used by world chefs to make dipping sauces or seasonings. “Up to now, besides the traditional production methods left by our ancestors which carry the characteristics of regions, high-tech and improved production methods have also been strongly developed in parallel. Fish sauce products have become abundant, serving the diverse needs of consumers," said Deputy Minister of Agriculture and Rural Development.

Up to now, the MARD has licensed 17 fish sauce production facilities that meet food safety conditions to export to markets. However, the amount of fish sauce exported by Vietnam only accounts for 12.6 percent of the total output. "Vietnam, with huge potential for marine exploitation and farming, still has a lot of room to bring this commodity to the world," said Deputy Minister Phung Duc Tien.

According to Mr. Le Thanh Hoa, Deputy Director of the Agro Processing and Market Development Authority, in terms of the export market, Asia currently accounts for the largest market share with more than 54 percent. "Although export turnover is increasing, in Europe and America, customers of Vietnamese fish sauce remain mainly overseas Vietnamese, while foreign customers are not many," said Mr. Le Thanh Hoa.

According to Dr. Tran Dang, Chairman of Vietnam Fish Sauce Association, and Prof.-Dr. Luu Duan, Head of Advisory Board - Vietnam Culinary Culture Association, foreign customers are familiar with bland dishes. They do not like the strong smell of fish sauce and suggest reducing the salinity and protein of fish sauce to suit the diverse tastes of consumers. 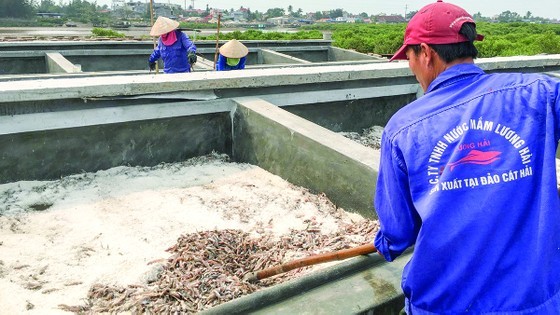 Making fish sauce by traditional methods. (Photo: SGGP)
Regarding this issue, the Chairman of Ba Lang Fish Sauce Association, a famous fish sauce-making village in Thanh Hoa Province, said that it was not difficult to reduce the salinity and smell of fish sauce. Fish only need to brew for a long time. Normally, the fish sauce must be fermented for about 18-24 months. If fish sauce makers use mackerel scads, it takes 4-5 years. The practical experience shows that the longer fish sauce is fermented, the better the fish sauce, with a mild smell and less salty. Fish sauce sold on the market is smelly and salty because the process is too short, and the product is rushed to the market. However, the longer the sauce is fermented, the higher the cost price, and the more investment is required.

According to Mr. Tran Dang, currently, the Vietnam Fish Sauce Association has been established under Decision No.610 of the Ministry of Home Affairs, as a socio-professional organization, that will support members to promote, protect the brand, increase the competitiveness and export of Vietnam's fish sauce industry in the international market. The association has connected scientific research units and organizations to have highly-applied topics and projects, helping fish sauce enterprises to increase protein recovery efficiency, improve quality, and meet the technical requirements, food safety, and international standards.

“The Vietnam Fish Sauce Association wants to develop the fish sauce industry like the wine industry of some countries in the world, where there is a smooth combination between science and tradition, between long-standing quintessence and precise technological measure to produce millions of bottles of delicious fish sauce of uniform quality and suitable for the taste of consumers in many markets,” said Mr. Tran Dang.

According to Prof.-Dr. Luu Duan, to promote the export of fish sauce, enterprises and households need to invest more money to change technology and apply quality management systems, such as HARPC, HACCP, and ISO 22000, to ensure requirements on food safety and hygiene, eligible for export to the US, Europe, and Australia. Deputy Minister of Agriculture and Rural Development Phung Duc Tien also suggested studying tastes, expanding export markets with a variety of fish sauces, and gradually building a national brand name for Vietnamese fish sauce.


Phu Quoc Fish Sauce Association in Kien Giang Province informed that this island produces about 25-30 million liters of fish sauce every year, about 5 percent of which, equivalent to about 1.4 million liters, is exported to 37 different markets worldwide. Ms. Ho Kim Lien, Chairwoman of Phu Quoc Fish Sauce Association, added that the association currently has 53 members, with about 56 traditional fish sauce facilities lasted for hundreds of years.

Phu Quoc fish sauce has thrived and flourished from 1945 to now; especially in 1998, with the support of the French Embassy, relevant ministries, and agencies, together with Kien Giang Province, conducted a dossier of geographical indication registration. On June 1, 2001, Phu Quoc fish sauce was the first product to be registered in Vietnam. In July 2013, the European Union (EU) granted a certificate of origin of Phu Quoc for Vietnamese fish sauce products. In August 2013, the Ministry of Industry and Trade handed over this certificate to representatives of the Phu Quoc District People's Committee and Phu Quoc Fish Sauce Association.